TSC Promotions 2021; Full List of Senior Teachers and Masters Promoted, Upgraded to Grade C4  in 2021 plus their Respective Schools

TSC Promotions 2021; Full List of Senior Teachers and Masters Promoted, Upgraded to Grade C4  in 2021 plus their Respective Schools 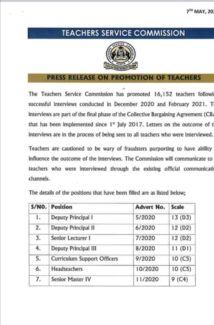 Release of 2021 TSC Promotion Letters: The release of the 2021 TSC Promotions Letters is a done deal after several TSC County directors delivered them to teachers who attended promotion interviews in December and February this year.

New TSC Promotion Criteria: The good news is that Classroom Teachers who have been successfully upgraded to higher Cadres, job groups have got every reason to smile now that their employer took into account length of service- number of years that the teacher has served in the previous grade.

TSC Promotions 2021: The twilight trek of a TSC employed…

In Nakuru County for instance all secondary classroom teachers who got TSC Promotion Letters upgrading them from mere teachers without administrative roles in grade C3 to senior masters in C4 have served the Commission faithfully for over 10 years.

There is therefore a glimpse of hope at least for regular teachers who were at the verge of desperation especially with the implementation of the 2017-2021 Collective Bargaining Agreement, CBA that saw them sidelined and offered a mere pittance in form of salary increment annually.

TSC Salary Rise as From July 2021: Currently, the Teachers Service Commission is in the process of finalizing talks bordering on the new Collective Bargaining Agreement, CBA with the Teachers’ union Kuppet.

Classroom Teachers who did not benefit much from the previous CBA set to end this July are likely to reap big after the Teachers Service Commission proposed a salary rise ranging between 16-32 per cent with administrators getting the lower percentiles.

Kuppet and KNUT are however opposed to the plan arguing that the proposed salary increment rates are below par.

Besides, the expected salary rise period is too long. The unions hence want the Commission to release funds meant for the pay rise in two phases only as proposed by COTU Secretary General Francis Atwoli.

According to Atwoli, effecting a CBA for over two cycles is an infringement of the rights of workers.

Teachers’ unions should therefore sign the new CBA on grounds that the funds for Teachers’ pay rise are released in two cycles only to avoid swallowing a bait that they will later not be able to vomit just like in the previous CBA.

Every year, the Teachers Service Commission TSC gets a share of the country’s  annual budget.

The money set aside for the Commission is meant for recurrent expenditure such as teachers’ salaries and new expenditure including  teachers’ recruitment and promotions.

Just like in the previous TSC budgetary allocation for the 2020/2021 financial year, the Commission is likely to experience a major set back after the CS Treasury Ukur Yatani revealed plans of limited funds that the government plans to set aside for  the TSC citing economic challenges geared by the Covid-19 pandemic.

TSC List of Schools with Promoted Teachers 2021 per county

Now that teachers promoted in 2021 have officially received their appointment letters, some counties have released lists of promoted senior teachers and masters.

Other counties however have kept this information and guarded it safely.

Below is the full list of TSC Promoted Teachers in Narok County, Rift Valley Region

In Narok County, a total of 34 schools had their teachers

promoted in the recent 2021 TSC interviews.

KCSE candidate stabbed by a 27-Year-Old woman, see what…

TSC Recruitment Vacancies to be Filled in January