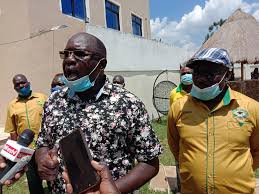 He urged the Commission to release interview results before principals from other counties get deployed to schools in Bungoma.

KUPPET Bungoma branch has blown a whistle over the delayed promotion of deputies to principals,

The county executive secretary Augustine Luketelo said that even after attending interviews in December 2019 the 136 deputy principals were still not considered for the promotions.

“We are perturbed as a union that TSC ignored Bungoma County despite our teachers attending the interviews that were conducted in every county. Since December 2019 when the interviews were conducted, the results have never been released and to our surprise, no single deputy has been promoted in Bungoma County and we want TSC to elaborate on this issue, “ said Luketelo.

The union has further warned TSC against any form of discrimination and requested the Commission to release the long-awaited results of the interviews before other heads get deployed to schools within the county.

The union expressed anger over the delayed promotions given that most of the affected deputies have stagnated in the same job group and positions for over 10 years.

“We are annoyed as a union. Our teachers have the capacity to lead. Why cant they be promoted into school leadership positions? Why are we being discriminated against? We are really annoyed and disappointed with TSC,” said Luketelo.