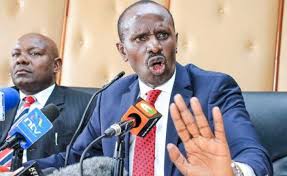 Speaking during the national assembly sitting, Sossion maintained that the Teachers Service Commission should respect the rule of law as well as teachers’ rights. The former KNUT secretary general’s ai is to stop the TSC from implementing new directives through the parliament to terminate the Teachers Professional Development programme.

Teachers Service Commission has recently rolled out the teachers’ professional development programme which aimed at offering in-service training programs for all active teachers in the country. The program has six modules each lasting five years, upon which teachers will get their certificate renewed. The commission had identified the institutions that will be offering the refresher training program, as they meet the training costs for the modules at a cost of six thousand shillings per year, which will be mandatory for all active teachers.

This program was however challenged in court, due to lack of public participation. The former secretary general had termed it illegal, saying they had not been involved in crafting it.

Wilson Sossion, together with other petitioners will continue to oppose the commission’s move, saying that the directives will affect the financial situation of tutors in the country.

Sossion has urged teachers to remain calm and to avoid panicking as he believes that the Parliament will stop TPD from being implemented.

The Education committee in parliament is set to sit early next week and deliberate on the issue fully.

PROPHET OWUOR’S BISHOP ON THE SPOT FOLLOWING A SEX SCANDAL