DR. NANCY MACHARIA’S REAPPOINTMENT WILL NOT BE A WALK IN THE PARK 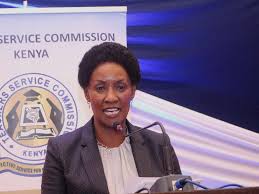 DR. NANCY MACHARIA’S REAPPOINTMENT WILL NOT BE A WALK IN THE PARK

Having served as the TSC Chief Executive Officer for five years, Dr. Nancy Macharia’s term is set to expire on June 30, 2020. Although the President has an opportunity of granting her another five-year term following the serenity that the education sector has experienced during her reign, LSK through its chair Nelson Havi is now routing for her removal on grounds of unsatisfactory performance. 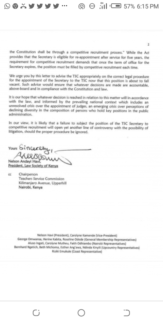 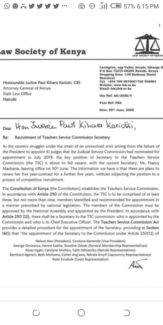 Uncertainty has engulfed the Teachers Service Commission, TSC following the expiry of TSC Boss, Dr. Nancy Macharia’s term. Dr. Macharia’s term ends on June 30, 2020 having served the Commission in the position of CEO for five years after taking over from her predecessor, Gabriel Longhoiboni.

There is however a “dark spot” on this matter that is making some key stakeholders unsettled, her reappointment to serve in the capacity of CEO for the next five years since the Constitutions allows this.

The CEO however has got nothing to lose, hers is to sit and follow the direction of the wind.

A quick glance by our media team at the recent activities at the Law Society of Kenya, LSK however shows that her reappointment will not be a walk in the park.

LSK has been a beehive of activities aimed at blocking Dr. Macharia’s reappointment on grounds of unsatisfactory performance.

The reappointment of the CEO is not an automatic process. She has to prove beyond any reasonable doubt that her performance is beyond reproach.

Since taking oath in 2014, Dr. Macharia has initiated various changes at the teaching service in Kenya.

One of the notable changes is the introduction of Career Progression Guidelines, CPGs which replaced Schemes of Service, SOS. The new CPGs saw thousands of teachers get automatic promotions to the next job groups as per the CPG terms.

During her reign, new grades were established to replace former job groups. These saw diploma teachers with higher qualifications who had stuck in one job group get promoted and instantly reap higher salaries from the Commission.

100, 000 P1 teachers who were previously placed in job Group G which has now been abolished by the Commission were elevated to Grade B5.

In the year 2017, Dr. Macharia signed a pact with teachers’ unions dubbed Collective Bargaining Agreement, CBA, which temporarily put a stop to the endless industrial actions by teachers. Before the signing of the CBA, the education sector was awash with teachers’ strikes which in the long run affected the academic performance of learners in public schools.

The CBA whose last phase, will be implemented in July 2020, is one of the greatest achievements attributed to Dr. Nancy Macharia as it ended the perennial teacher strikes.

As they say, there are two sides to every story. Besides, every coin has got two sides. Dr. Macharia’s term did not fail to stir controversy and cause displeasure.

In fact, as her term expires tomorrow, there are some quarters that cannot wait to jubilate over her exit, if she is not reappointed.

She found new adversaries in one of the giant teacher unions, KNUT.

In April 2019, 160 teachers were interdicted out of 42 got dismissed after boycotting CBC training under her watch.

Most of them were KNUT branch secretaries, chairmen, women representatives, and BECs. Besides, TSC Boss has been ruffling feathers and smothering KNUT. To start, the TSC stopped remitting salaries to the union in December 2019 despite being directed by the Court to do so in December. Read the full article by clicking on the following link

Secondly, the Commission failed to effect promotions for teachers who were KNUT members on grounds that they will continue getting promoted on the former schemes of service. This saw many teachers withdraw their membership from the union to get promoted.

The latest drama involved deregistration of KNUT Boss Mr. Wilson Sossion. This opened a can of worms culminating in proposals to disband the Commission. The proposals were however turned down by the BBI team on grounds that the TSC was an independent Commission anchored in the Constitution.

A month ago, the Commission through its social media platforms directed teachers to ignore fake news purporting that Dr. Nancy Mcharia had been replaced by Dr. Kennedy Mulunda.

According to the fake news, the TSC Boss was currently on leave. Dr. Mulunda is the Deputy Commission Secretary, the second in command after Dr. Nancy Macharia.

Despite their lack of authenticity, the news seemed to attract numerous reactions with teachers celebrating the end of TPAD oppression.

As her term expires tomorrow, all eyes are set on the President to appoint a new TSC CEO or reappoint Dr. Nancy Macharia…

TSC Jitters as KUPPET Issues 7-Day Ultimatum For the…

2020 KCPE AND KCSE KNEC Exams likely to be disrupted…