This is Why Coronavirus is Wreaking More Havoc Among the Black -American Communities.

What could be the explanation for this disparity in Chicago? 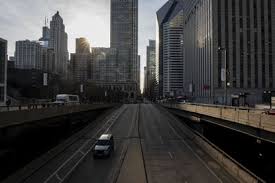 BBC has revealed disturbing news in the wake of the Coronavirus in the US. This follows the release of statistics from Chicago health officials. It is coming out that the blacks living in Chicago account for half of the entire Covid 19 cases in the city and more than 70% of deaths, despite constituting  30% of the population.

It is disturbing also that other cities with huge black populations like New Orleans, Milwaukee, Detroit and Newyork have become the new Covid 19 hotspots.

The records further reveal that a total of 370,000 Americans are infected with this virus while about 11,000 people have succumbed to the virus.

This is against a backdrop of 75,000 deaths and 1.3 Million infections cases globally.

Why is it that the virus is devastating to more blacks compared to others?  Could it be linked to their living conditions? Is it not disturbing that blacks account for 41% of Covid-19 fatalities, despite making up to 14% of the population in Illinois?

It is on record also that the black city residents had a lower life expectancy compared to their white counterparts. According to the Chicago public health commissioner, Dr. Allison Arwady, the blacks already lived on average about 8.8 years less than the white population.

Nationally, data has revealed that vulnerability to the infection may vary from one neighborhood to another. A case in point is the data of the infections and deaths from Michigan. Black Americans make up 14% of the entire population, however, they account for 33% of the covid 19  cases and 41% of deaths, according to the state health department.

Another case in point is data from Detroit and Michigan. It reveals that 80% of the confirmed Covid19 cases are blacks who constitute about 80% of the population here.

According to mayor Lightfoot,  respiratory diseases, heart conditions and diabetes were very common among the blacks living in this city. This was associated with food and lack of exercise due to lack of walkable streets by Dr, Awards.

Dr, Cameron Webb, a black American physician is on record telling the BBC that the racial and economic disparities were being pronounced by the pandemic. He said that “ it exposes our society’s fault lines”