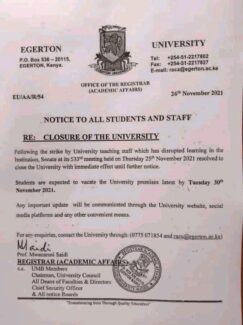 Education News Today: Parents and guardians of Egerton University should look forward to meeting their sons and daughters at home as from today following an indefinite closure of the institution.

In an official notice released by Egerton university registrar of academic affairs, the University Senate reached a resolution and decided to close the University with immediate effect following the strike by University teaching staff which has disrupted learning in the institution.

KUCCPS Portal: This is How You Can Easily Check KUCCPS…

HOW TO ACCESS THE UNIVERSITY OF NAIROBI, UON E-LEARNING…

UNIVERSITY OF NAIROBI, UON RANKED AMONG THE BEST…

Academic staff from Egerton University have been on strike over a week now. The alleged bone of contention is an agreement which covers salaries and benefits for 2017-2021 meant to have been negotiated, to replace the previous 2013-2017 agreement but no action has since been taken.

According to the universities, there are serious cash crunches culminating in a financial crisis.

This financial crisis has been exacerbated by the Commission for University Education’s CUE’s decision to cut off cash income for the universities after a declaration locking out students. According to CUE’s latest directive, indicating that universities should only admit students with a minimum C+ grade in KCSE examination.

This means that KCSE canfidates with a lower score will not be admitted to the self sponsored Module, parallel programmes that universities used to admit part time students paying market rate tuition fees.

The parallel programme has been the air for most universities given that the government gives them limited capitation.

These programmes have been a veritable cash cow for universities. Therefore their elimination makes a serious dent in the universities’ bottom line.

The scrapping of self sponsored programmes in universities has since birthed  strikes and go slows that paralyse the education system in the country.

According to the report shared by the Egerton university notice, the institution was closed indefinitely following the teaching staff’s strike. Therefore all students are expected to vacate university premises latest by Tuesday 30th November.

In a notice of Egerton university students have been urged to be in touch with university website, social media platforms since all important updates will be communicated through those channels.

Egerton University is not the only institution facing tough times, other universities are currently cash strapped following the slashing of government funding this year. Read the full details below;

• Treasury CS Ukur Yatani on Thursday said that university heads will meet in July with a view of addressing the funding problem.

• In 2019, Education CS George Magoha proposed the institutions cut size of non-teaching staff among other changes to reform the management of universities.

Universities have lost Sh16.7 billion in funding compared to last year, with Treasury proposing Sh77.7 billion in this year’s budget.

In the last financial year, universities were allocated Sh94.4 billion.

The funding cut is no surprise the as IMF had singled public universities as a sector of the economy that needed to reduce spending when it gave Kenya a recent loan facility.

The reduction in funding will further cripple operations at universities that have struggled to pay staff wages and remit statutory deductions.

As of January, public universities had not remitted statutory deductions worth Sh34 billion.

Treasury CS Ukur Yatani on Thursday said that university heads will meet in July to discuss how to fix the funding problem.

Yatani said the government hoped schools and colleges will overcome the Covid-19 outbreak that disrupted in-person teaching and learning.

“The government is determined to ensure the time lost is recovered in appropriate time while ensuring safe learning in schools,” he said.

The Treasury has proposed Sh202.8 billion to support programmes in the education sector.

Free Primary Education got Sh12 billion, while Sh2.5 billion was set aside for hiring more teachers.

Examination fees waiver for Standard 8 and Form 4 candidates will cost the Treasury Sh4 billion as another Sh1.8 billion goes to the school feeding programme.

The implementation of the new curriculum to Grade 5 in July was boosted with Sh1 billion.

The digital literacy programme got Sh420 million and technical and training institutes received Sh1.8 billion for equipment and buildings.

The Teachers Service Commission received Sh281.7 billion while the Higher Education Loans Board will get Sh15.8 billion.

Good News to TSC Interviewees who Applied for the 11, 570…

TSC TPAD2 ; List of Teachers with Incomplete Appraisals per…