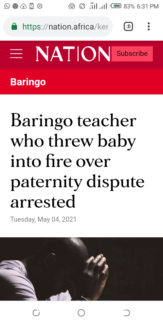 TSC Teachers News: A head teacher in Baringo County has left a trail of destruction and a Hallmark of inhumanity after he allegedly threw a five month infant into fire following a paternity dispute.

The suspect is currently in police custody awaiting to be arraigned in court for the heinous crime.

The teacher hails from Ng’aratuko, Baringo North Sub-County whete he allegedly attempted to kill the baby, following a paternity impasse with his wife.

The suspect, who is a school head of a school in the neighbouring Tiaty Sub-County, is reported to have arrived home under influence 7 days ago and threatened to kill the baby, since he is not his biological father.

As a result of his thoughtless actions, the innocent infant in question sustained serious burn injuries on the face and knees and has since been admitted at the Baringo County Referral Hospital in Kabarnet for monitoring and medication.

According to Baringo North Sub-County Police Commander Fredrick Odinga who spoke to the Daily Nation the teacher, who went hiding after the heinous act, was arrested by elders on Monday evening and taken to Loruk Police Station.

“The suspect is in our custody at Loruk Police Station after he was brought in by elders. He went into [hiding] after allegedly throwing his five-month-old baby into the kitchen fire over domestic disputes and will be arraigned to answer to charges of the offence committed,” said Mr Odinga.

According to the mother of eight, her husband arrived home a week ago and threatened to kill the baby saying he did not father him as his ears did not resemble his or those of his relatives.

“I normally sleep in the kitchen with other young children, including the infant. He arrived home at around 9pm drunk, claiming that the baby’s ears didn’t look like his or his kin’s and accused me of infidelity. I thought it was his usual talk as a result of his habitual drunkenness and I rushed to the sitting room to get a plate to feed him thinking it would quell his ranting,” said the infant’s mother.

Baby in the fire

“I heard the baby crying and ran back to the kitchen only to find the door closed from inside. Sensing danger, I screamed to alert the neighbours as I pushed the door. When it finally opened, he was holding a machete while the baby was already in the fire crying. I gathered courage and pushed him to the wall as I struggled to pull the child from the fire,” she narrated while fighting back tears.

Being a remote and insecurity prone village, she spent the night at a chief’s house and the baby was rushed to Marigat Sub-County Hospital the following day where he was referred to Baringo County Referral Hospital in Kabarnet for specialised treatment.

“I have sleepless nights because the baby is crying owing to the injuries. I don’t even know if he will ever see because the eyes were also burnt and part of the nose was also affected. I am appealing the concerned authorities to arrest the culprit for the heinous act inflicted on an innocent child,” said the sobbing mother.

According to the woman, the suspect had previously hit the baby when he was barely three weeks old over the same claims, fracturing his hip bone.

“We have sired eight children with this man. He never complained when I was expecting this eighth child only to issue threats when the baby was born, disputing his paternity,” she said.

Aloe Papa, a doctor at the hospital where the infant is recuperating confirmed that he had sustained 10 degree burns on the face and the knees.

“The infant is currently stable but we are still assessing to see if he will require skin grafting or if it resulted in any complications because the burns extended to the eyes. There is also a history of the child being hit on the thigh by the same person where he sustained a femur fracture,” said Dr Papa.

Baringo North Children’s Officer Irine Chepkwony said that cases of violence against children are on the rise in the area and promised to follow up the case to the end to ensure that the baby gets justice.

“The suspect is a primary school headteacher who has been entrusted to take care of hundreds of school children. His integrity should be checked because if he can attempt to kill his own child, then how safe are the learners in the school?” wondered Ms Chepkwony.

“We have taken the statements from the mother and we have filed the case at Loruk Police Station. Reports have emerged that the baby was also assaulted by the same person when he was barely three weeks old and it went unreported. We are following the two cases to ensure that whoever is responsible for the heinous acts is charged in a court of law,” she added.

The officer regretted that most families in the remote villages in the region are going through the same predicaments but many go unreported because of high illiteracy levels and retrogressive cultural beliefs.

Courtesy of the Daily Nation

TSC Directs Schools to Observe the New Guidelines Below When…