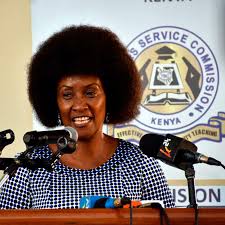 TSC News Today; Teachers who were recently contracted to oversee the August 9 polls can finally breathe a sigh of relief after TSC issued this latest directive giving them the green light to continue with their service to the Independent Electoral and Boundaries Commission, IEBC.

Initially, the Commission’s boss Dr. Nancy Macharia had directed that all teachers shun IEBC jobs such as clerks, Presiding, and Deputy Presiding Officer posts across the 47 counties and instead stick to the tight academic calendar.

Later communication by the TSC indicates that all teachers who the IEBC hired can now proceed on leave in order to aid the Commission in conducting the general polls seamlessly.

In addition, the teachers’ employer has advised administrators of institutions to ensure that all schools designated by the IEBC as polling centers are made available for the exercise.

“Inform Institutional Administrators to ensure that all schools designated by the IEBC as polling stations are made available for the exercise,” said TSC Ceo Dr. Nancy Macharia.

Furthermore, the commission has urged all teachers to report to schools on Thursday the 11th day of August as directed.

Ensure that all teachers report to schools on 11th August 2022, when schools are reopened, or as would be advised by the Commission.

This comes barely a day after the Ministry of Education directed the immediate closure of schools for the mid-term break.

The general election is slated for next week on the 9th day of August 2022.

Some officials said that primary school teachers had a crucial CBC national assessment to complete and that by attending the training, they would endanger the lives of students.

Others, however, have made it plain that teachers must perform their duties during school hours and must be present to help students.

On this term’s official reopening dates, both teachers and parents are apprehensive with the majority thinking that the mid-term break may be way too short to allow the IEBC to conclude the national exercise.

Some parents and guardians have confided that they will only release their children once the new president has been inaugurated and if they are assured of the stability of the nation.

Today, more police officers have been deployed to volatile areas in the Rift Valley including Molo town to ensure peace and stability.

Now all eyes are trained on the IEBC to keep its promise by delivering a transparent, free and fair election.

CS Magoha has at the same time requested the new government to extend his term to allow him to complete the building of new classrooms for junior secondary school.

KMTC Gives Greenlight on the September 2022 Intake; Here is How to Apply

TSC TPD News Today; Why Government Will not Pay the Ksh…

List of TSC-employed TEACHER SWAPS; A Complete Guide to…