-Kirinyaga Governor (who feels aggrieved by the song) yesterday wrote a letter demanding that King Kaka should withdraw the song.

-According to Governor Waiguru, the song is aimed at tainting her “good” name, therefore, King Kaka should apologize for the “harm” and “emotional turmoil” he has caused her.

Kenyans on social media have vowed to support King Kaka amidst the impending onslaught from Kirinyaga Governor Anne Waiguru.

Kennedy Ombima AKA King Kaka, a Kenyan rapper on Saturday, December 14 released his latest hit song labelled “Wajinga Nyinyi” a song which has not gone down well with the Kirinyaga Governor.

The song also serves as a wake-up call for Kenyans who have been engrossed in their long-overdue stupor when it comes corruption.

On Monday, December 18 Kirinyaga Governor Anne Waiguru through her lawyers Kiragu and Company Advocates gave the musician 48 hours to apologize to her in writing and delete the song failure to which he will be sued in court for defamation.

In the letter, Governor Waiguru also accuses King Kaka of tarnishing her name to increase his profits and popularity.

The letter also demands that King Kaka should pull down the song from all social media platforms forever and commit in writing not to release any more defamatory songs within 48 hours.

Governor Waiguru also complained that King Kaka had painted her in a bad light especially in the corruption scale and as a leader who does not deserve to lead Kenyans.

Governor Waiguru had been implicated in the National Youth Service, NYS Scandal but she was cleared by the investigating agencies.

According to the letter, the musician should have known that despite extensive investigations and several prosecutions, Governor Waiguru has never been charged in a court of law concerning the NYS or any other corruption scandal. 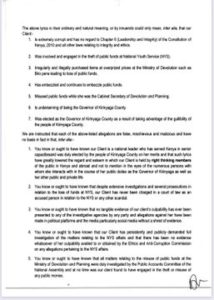 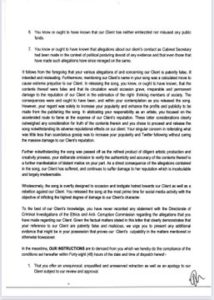 2019 KCSE EXCLUSIVE NEWS: REASONS WHY THE 2019 KCSE RESULTS WILL BE RELEASED ANY MOMENT FROM NOW