For starters, the table below  shows the basic salary of teachers as captured in the latest CBA 2021-2025

News reaching our media desk reveals that the teachers’ employer TSC has paid the much-awaited July Salaries to all her employees. The salaries have been hitting teachers’ accounts as early as today in the morning with KCB, National, and Family banks account bearers providing the confirmation.

Several teachers have confirmed to our media platform, Newspro, that they have received July Salary increments in arrears.

Another lot of teachers whose automatic promotions to the next job groups/cadres were pending have had their application for promotion get affected.

These are majorly teachers who had completed the 3 years in the entry job group based on their entry qualifications. All these upon appropriate appraisal by their immediate supervisors have been moved to a new cadre as per the Career Progression Guidelines.

As expected, it is now confirmed that the school administrators including senior teachers, deputy headteachers, headteachers, and principals are the greatest beneficiaries of this pay raise. This did not come as a shock to many as the Commission had made public the six job groups that were to reap big from these changes. 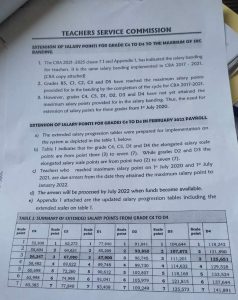 The elongation salary scale points for grades C4, C5, D1, and D4 are points three through seven, according to the table above.

The extended salary scale points for grades D2 and D3 range from point two to point seven. This month, the arrears will be paid.

Nevertheless, according to TSC, teachers in grades B5, C1, C2, C3, and D5 are ineligible for compensation raises under the conditions of the CBA 2017–2021.

According to TSC, the teachers’ salaries cannot increase because they have already reached their maximum salary points.