TSC Salary Scales; This is How TSC Arrived at Lower Salaries than What is Stated in the CBA for Teachers Promoted to C4

TSC Salary Scales; This is How TSC Arrived at Lower Salaries than What is Stated in the CBA for Teachers Promoted to C4

Jubilation is in the air and third term seems to have begun on the right note as after the Teachers Service Commission, TSC released promotion letters for teachers especially those who have now been upgraded to C4.

Our focus is on this particular cadre of teachers since for over 10 years, they have stagnated in Job group L without prospects of a better salary after hitting the ceiling-maximum salary despite the harsh economic times.

Although the Commission took into account factors like regional balance, integrity, and affirmative action, it is crystal clear that other parameters including length of service did play a key role.

From our analysis, any teacher who was on the TSC payroll as of the year 2008 got promoted to C4 which is an entry grade for administrative positions.

With the Promotions, the Commission availed higher salary perks for the teachers since this means more responsibility on their part.

The teachers will henceforth be charged with greater responsibilities including overseeing curriculum implementation and helping in school management.

Kindly note that the 2021 TSC Promotions are pegged on the 2017-2021 Collective Bargaining Agreement, CBA signed between the Teachers Service Commission and teachers’ unions.

This is the last phase of the CBA which will come to an end this coming July.

However, complaints have now risen following the huge disparity between the salary stated in the CBA and what is actually stated in the teachers’ promotion letters. See the images below; 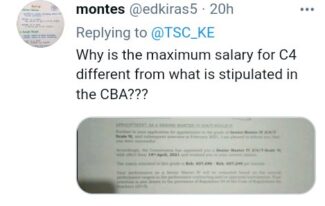 Below is a sample letter of Promotion to senior master IV which is an entry grade to administration. 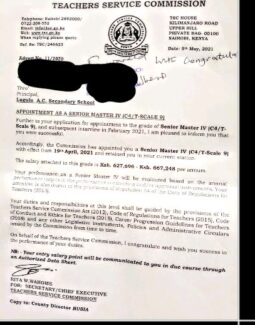 The letter clearly stipultes the new responsibilities the teachers will be undertaking upon assuming their new roles.

The teachers are to remain in their current stations contrary to what many believed. There were fears that teachers would be delocalized to other areas upon Promotions.

Another important thing to note about the new position is that the performance will be based on annual performance contracting for school administrators.

According to the letter, the annual salary for teachers in this grade ranges from ksh 627,696-667,248 besides other allowances. This brings the maximum for this job group to Ksh 55,000 per month.

The new salary therefore is lower than what the CBA had stated. Take a quick look at the image below 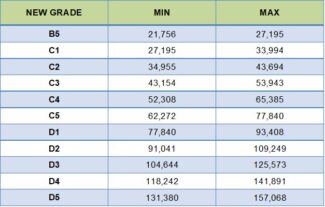 A closer look at the above image however shows that there is a range for the salaries paid for teachers in grade C4.

Besides, the Commission uses a T-Scale to determine teachers’ salaries.

The salary range therefore differs depending on when and where the teacher has been upgraded, the point of entry.

Teachers who have served the Commission for a relatively longer period automatically earn higher Salaries due to the annual Increments.

TPAY Update- This Is How To Know If Your HeadTeacher Has…

KCSE NEWS: MARKING OF THE 2019 KCSE EXAMS TO END THIS WEEK