Nancy Macharia Taken to Task over Delayed CBA Salary Rise Negotiations, Check out her Response Below 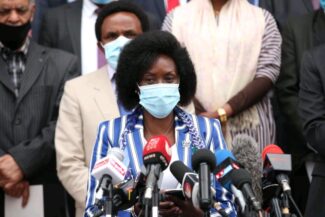 Parliament has opened a can of worms after taking reappointed TSC boss Dr. Nancy Macharia to task on matters pertaining to the July 2021 anticipated salary for teachers.

The Members of Parliament are inarguably concerned that talks on the next CBA 2021-2025 that will prevent industrial action by teachers are yet to commence despite the fast approaching conclusion of the 2017-2021 CBA that will end in June 30.

Secondly, only two TSC commissioners have been on duty since March 19, seven have retired making it difficult to effectively deliver on their part.

MPs therefore demand to know who should shoulder the blame for delays in the 2021-2025 CBA salary negotiations and recruitment of new teachers to bridge biting teacher shortages in Kenyan schools.

Should they point fingers at the dysfunctional Teachers Service Commission (TSC)?

Lawmakers hard pressed TSC chief executive Dr. Nancy Macharia to explain to them whether lack of enough quorum that has rocked the commission will risk the welfare of teachers, including negotiations on a new Collective Bargaining Agreement (CBA).

According to the Members of Parliament, only two commissioners have been in office since March 19, as seven have retired.

The two are therefore incapacitated and unfit to make binding decisions as the nine-member commission is only considered legally constituted with at least half of the members.

To date, the Teachers Service Commission is yet to start negotiations with unions despite the fact that the 2017-2021 CBA ends on June 30.

Education committee chairperson Florence Mutua said without a quorum, the commission is unable to operate.

“Can the CEO explain why she did not notify the President when she realised that the commission lacks quorum to decide on teachers issues? How have they been operating?” Ms Mutua asked. Migori woman rep Pamela Odhiambo lamented the quorum hitch, saying, teachers’ issues are crucial.

“Some of the commissioners retired in 2019, why has it taken too long to pick their replacement?” Dr Odhiambo asked.

TSC is responsible for recruitment, promotion, disciplinary processes and reviewing the standards of education and training of teachers. However, Ms Macharia dismissed claims that lack of quorum had affected the functions of the commission.

She said TSC has been focusing on implementing earlier decisions, adding, it is not within her purview to notify the President on retirement of commissioners.

On Wednesday, the National Assembly approved the appointment of Dr Jamleck Muturi as chairperson and Mr Alfred Otieno Oyucho as a commissioner.

During his vetting, Dr Muturi pledged to work with the Ministry of Education, unions and other stakeholders to streamline the teaching profession and restore the commission’s relationships with unions.

The committee has also recommended that the House approves the nomination of Prof Fatuma Chege as the Principal Secretary for State department for the Implementation of Curriculum Reforms in the ministry.

Before her appointment Prof Chege was the Deputy Vice Chancellor in charge of Administration at the Kenyatta University.