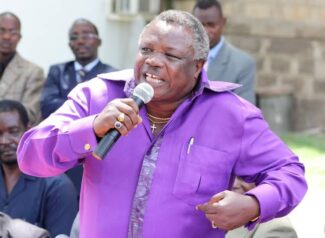 Teachers and civil Servants have threatened to down their tools over undue pressure and frustration stemming from the National Treasury.

This move is anchored on the fact that the government currently owes public servants close to Sh. 83 Billion in salary increases.

State Officers and Labour Unions have backed up the strike notice noting that if the state does not honor their collective bargaining agreements (CBAs) it struck with its workers, they will have no choice but to go on strike.

As per the 2017/18 to 2020/21 salary review by SRC, teachers and civil servants were expecting a significant pay rise since the government was expected to channel Sh. 83.4 billion to their accounts.

The National Treasury Cabinet Secretary -Ukur Yatani however wrote to the Salaries and Remuneration Commission (SRC) claiming that his ministry will not channel the full amounts.

SRC secretary Anne Gitau said that the National Treasury’s decision to delay the pay rise is pegged on the current cash crunch caused by the forthcoming General Election and the disadvantageous impacts of the COVID-19 pandemic.

The National Treasury has allocated only 10% of the Sh. 68 Billion (Sh. 6.8 billion) that is meant for the 4-year salary reviews for the national government and county workers in the next budget. Ukur Yatani said that the remaining funds shall be released in phases in the 2022/23 to 2024/25 financial years.

The labor union leaders are not impressed with this decision and have pointed fingers at Yatani for using elections and COVID-19 as scape-goats to withhold their rightful dues.

The Kenya National Union of Teachers (KNUT) Secretary-General Wilson Sossion said that the Government and employers should be prepared for strong resistance from unions adding that the economy was more than able to provide the Sh. 83 billion. Around two-fifths of the allocated amount was to be allocated to teachers.

COTU Secretary General Francis Atwoli said that the pandemic has caused global economic recession but noted that counties make budgets every year hence workers do not have to wait for 4 years. He added that the money borrowed should be used to support Kenyans.

“I said that the billions we are borrowing should supplement our budgetary allocations and also fight of COVID-19. But do not be pocketed by a few individuals,” said Francis Atwoli.

TSC Salaries 2022: Big win for teachers in the proposed…

However, the Public Finance Management Act 2012, does not permit the Government to spend money that is borrowed to pay salaries.

The KNUT SG said that excessive borrowing in the economy should not be used to punish teachers and civil servants.

Kenya Universities Staff Union (KUSU) said that the State must look for funds for workers’ CBAs or run the risk of industrial action.

“Kenyans pay taxes and workers are Kenyans. So they will have to get what is due to them. The Government must look for money to implement CBAs. Said KUSU secretary-General Charles Mukhwaya.

“Sh. 6 Billion is a drop in the ocean and a big joke,” added Mukhwaya.

Akello Misori on his part said that he had no comment at that time.

KUPPET had held a 3-day retreat in Naivasha to discuss pending issues in the CBA and to prepare for the next stage of the agreement.

The small amount remitted is set to affect classroom teachers who are hoping to benefit from the next CBA.

In the current Sh. 53 Billion CBA, classroom teachers were disadvantaged with headteachers receiving a good piece of the cake.

The Deputy Secretary-General to the Civil Servants Jerry ole Kina announced that they are in the last phase of their CBA negotiations with the government and are expecting feedback from the government on Monday.

“Before we can comment, let’s hear them first. If it is a positive answer we shall welcome it. If this is the entire public service then we need to know the fine details of what they are talking about,” he said.

Atwoli was concerned about how the public servant’s CBAs have been structured. He maintained that CBAs should be of 2 – year cycles and not 4 years as per the current practice.

“And they have arm-twisted the unions to accept the four-year cycle, which is illegal, unconstitutionality against the ILO (International Labour Organization) conventions,” said Francis Atwoli. Atwoli noted that with 2 years cycles the subject of general elections would not exist.

KUCCPS Portal Login; Full List of Programmes Offered at the…