In the Collective Bargaining Agreement (CBA) signed between TSC and the main teachers’ unions, the Commission promised to embark on promoting teachers serving in Arid and Semi-Arid Lands (ASAL) and hard to staff areas that hold administrative positions progressively until they reach grades that are commensurate to their respective positions.

The following are the official ASAL and Hard to staff areas: 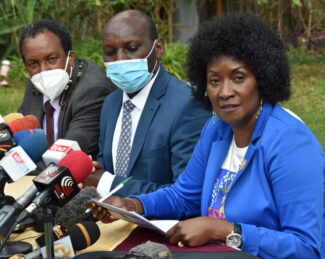 Latest TSC Hardship Counties 2021-2022: According to the Teachers’ employer, Teachers Service Commission, payment of the hardship allowance will no longer be paid to the staff working in the recently scrapped areas.

All the Sub-counties located in Nyandarua County have now been scrapped off completely from the list of hardship areas. Also affected are Kigumo, Murang’a, Kandara and Nyahururu Sub- Counties.

The Commission has Mapped various areas as hardship. The areas considered as hardship include all those that are prone to terrorism, famine and aridity. As of 2012, TSC had about 38 areas approved and documented as hardship.

Currently, the teachers teaching in schools located in some parts of the following counties receive monthly hardship allowances.

TSC News Today! Teachers Given 14 Days To Forward Their…

TSC News Acting School Administrators To Be Confirmed In…

How TSC Remunerates, Pays Teachers Salaries; The Role of the…

TSC set to do away with Hardship allowances for some areas

The Teachers Service Commission, TSC, pays extra allowances (hardship allowances) to teachers working in areas classified as hardship. While classifying an area to be a hardship area, the locality must meet any of the following conditions:

~Lack of or unavailability or inaccessibility to enough and quality food,

~High rates of Insecurity and a big possibility of security threats.

Hardship allowance on that note is therefore paid in an effort to compensate for the cost of living for teachers working in areas designated as hardship.

As stated above, teachers working in hardship areas face a couple of challenges; ranging from lack of enough and clean water, constant flooding to hostile living conditions characterized by constant attacks from bandits.

Way back in December, 2014, the Salaries and Remuneration Commission, SRC, reviewed hardship Allowances to be paid at a flat rate for all equivalent grades/ job groups.

The list below summarizes the monthly hardship allowance rates that are paid to teachers working in hardship areas; per job group:

HELB Reveals Why More than 95,000 Students Will Miss HELB…

KNUT DELINKS ITSELF FROM PETITION SEEKING TO BLOCK THE…