TSC RECEIVES BACKLASH FOR DENOUNCING A LENGTHY DOCUMENT CONTAINING DETAILS OF ALL SCHOOL ADMINISTRATORS IN ALL THE 47 COUNTIES; TSC NEWS

HOW COULD SUCH SENSITIVE DATA BE LEAKED?

TSC RECEIVES BACKLASH FOR DENOUNCING A LENGTHY DOCUMENT CONTAINING DETAILS OF ALL SCHOOL ADMINISTRATORS IN ALL THE 47 COUNTIES; TSC NEWS TODAY

HOW COULD SUCH SENSITIVE DATA BE LEAKED? 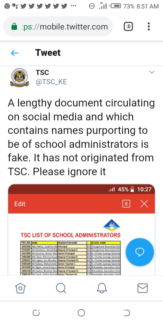 The Teachers Service Commission, TSC has received a backlash from teachers on social media after the Commission denounced a list containing details of all school administrators in all the 47 counties.

This is after the Commission advised tutors to ignore the lengthy document doing rounds on social media on grounds that the document did not originate from the Commission.

“A lengthy document circulating on social media and which contains names purporting to be of school administrators is fake. It has not originated from TSC. Please ignore it,” wrote the Commission on its official tweeter handle.

Put your house in order

Responding to the TSC post, some concerned tutors are simply perplexed by the Commission’s denunciation. Some do not understand how such a lengthy document could find its way into social media platforms.

Some teachers have challenged the Commission to clean its house instead of allowing corrupt individuals to leak important information to the public only for it to disown the information a few days later.

“Who is the originator and where does that person obtain very confidential information of school heads and other administrators from?” challenged one of the teachers.

Another tutor also wondered where such confidential information such as TSC numbers, work station, names, and grades/ job groups could be obtained from. Surely, there is no way such credentials can be made up.

OUR OTHER LATEST ARTICLES ON TSC MATTERS INCLUDE

TSC ignores call to lower entry grades for marginalized tutors, as the recruitment of 1, 517 teachers in the North-Eastern region kicks off

Other critics have also attributed the leaking of important information regarding teachers’ issues to bloggers who are in most cases correct.

They thus challenged the Commission to take charge of crucial information before it loses its grip.

“Going through the document, almost everything is real. From schools, TSC numbers to job group placements. These documents are leaked by some bloggers who are close to TSC officials at the Headquarters,” argued another.

The Commission has since been challenged to take charge and sue those responsible for exposing such confidential information before it loses its grip.

According to the details contained in the fake document, some counties have got more chief principals while others have got none.

For instance, Kiambu County has got the highest number of chief principals in the country, seventeen out of the total 151.

In the second position is Homabay County with 10 followed by Nyeri which has got nine.

Isiolo, Lamu, Kwale, Marsabit, Tana River and Turkana counties on the other hand have none.

Chief principals are the highest-ranked teachers who are entrusted with the responsibility of managing national and extra county schools with over 1, 000 learners.

When it comes to Senior Principals, the second-highest rank, Murang’ a County takes the lead with 60 followed by Kakamega(56), Kiambu(55), and Meru(53).