TSC Advertises Slightly Over 1,200 Recruitment Vacancies to be Filled in July/August 2022

TSC Advertises Slightly Over 1, 200 Recruitment Vacancies to be Filled in July/August 2022 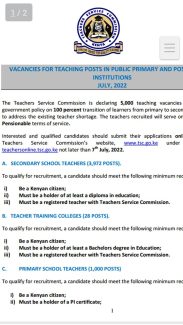 The Teachers Service Commission, TSC, has advertised slightly over 1,200 teaching vacancies for teachers hailing from and willing to work in the far-flung North Eastern region counties that encompass Garissa, Moyale, and Mandera. The commission is seeking to hire teachers on both permanent, pensionable(844), and contractual terms(386).

TSC List of Available Teaching Vacancies as of July-August 2022

In the same breath, TSC also re-advertised 386 teacher posts (114 for primary schools and 272 for secondary schools) on contractual terms to fill vacancies in Garissa, Wajir, and Mandera counties.

Interested candidates who are not from the three counties need to be registered teachers with the commission, be holders of P1 certificates in the case of primary schools, and a minimum of a Diploma in Education in the case of secondary schools.

“Interested and qualified candidates should submit their applications online through the Teachers Service Commission’s website, www.tsc.go.ke under ‘Careers’ or teachersonline.tsc.go.ke not later than 7th July 2022,” TSC added.

According to TSC boss Nancy Macharia, the government has been allocating funding resources to allow us to recruit an average of 5,000 teachers annually for our public schools. However,  primary and post-primary institutions still have a shortage of 114,581 teachers.

The TSC boss attributed the shortage partly to the 100% transition policy by the government, which seeks to ensure all students who complete their primary education are fully enrolled in secondary schools.

“Merit lists generated during this recruitment for both primary and secondary schools will be used in subsequent recruitment processes within the financial year,” the circular reads.

The deadline for submission of applications is July 7, and the list of shortlisted candidates will be uploaded on the commission’s website on July, 15.

According to the 2021 Annual Report of TSC, teacher shortage in primary and secondary schools stood at 99,213.

The report, which was presented to the National Assembly, said the figure represented 44,134 and 55,079 teachers for primary and secondary schools respectively.

Under the Medium-Term Plan III of the Vision 2030, the government empowered TSC to recruit 5,000 teachers annually to alleviate the teacher shortage.

In an effort to support the implementation of CBC, the commission trained 131,275 master trainers and teachers.

During the period, 42,795 teachers were registered.

In addition, 13,124 teachers were employed by the commission and 6,705 teachers were posted, transferred, or deployed in different stations.

Some 8,124 exited service through natural attrition, while a further, 12,000 intern teachers were hired.

The Long Wait Over! TSC Advertises 5000 Fresh Recruitment and 8,230 Replacement Teaching Vacancies to be Filled in July-August 2022