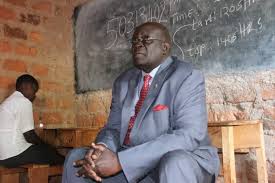 The Kenya Union of Post Primary Education Teachers, KUPPET has pointed a finger at outgoing CS for Education Professor George Magoha whose tenure will come to an end this August over his recent remarks that teachers will not get a penny in the name of salary increment since the government has already invested too much in the education sector.

His remarks have not only incensed teachers but also KUPPET officials who are now up in arms having discovered where the buck stops.

The fact is that much as CS Magoha is not directly involved in determining whether TSC teachers should be given a pay rise, his remarks do matter since they can be used to shape opinions and make final decisions.

Magoha was recorded n Thursday giving unsolicited advice purporting that there is no room for salary increment for teachers in the already “squeezed” government budget.

” The government is already spending 25.9% on education, although I am not in the salary docket, the 60% teachers are asking for is unreasonable,” he remarked.

“According to the Minister, teachers are being unreasonable in demanding their share of relief from economic effects that have pushed the teachers to the end of the tether,” said Misori.

He further said that teachers’ salary increment is an indispensable aspect of the country’s economic planning.

Since January, both KUPPET and KNUT have been pushing for a renegotiated CBA 2021-2025 that may see teachers gain monetary benefits technically referred to as pay rises or salary increments.

“Not only have teachers’ income been eroded by high inflation over the years, but they do also deserve salary reviews under the 2021-2025 Public Sector Review Cycle which they were denied last year owing to the biting effects of the Covid-19 pandemic,” Misori added.

Teachers are demanding a 60 per cent salary increase, which they want implemented immediately.

Knut secretary general Collins Oyuu said the high cost of living has pushed for a rethink of teachers’ salaries.

“We have commenced a structured negotiation with the employer to see to it that a 60 percent salary rise is awarded to teachers,” Oyuu said.

Oyuu spoke during a press conference at Knut’s head office in Nairobi.

He called for a review of the 2021-25 collective bargaining agreement, which was signed with non-monetary benefits.

“The human resource benefits are both to the teacher, the employer, and everyone in this profession,” Oyuu said.

“The inflation rate at the moment does not allow us to continue having boardroom meetings with our employer. The economic times are extremely harsh,” he said.

Oyuu said these demands formed part of the discussions held between TSC and Knut from July 7 to July 9.

The official promised that the union and TSC have a formidable relationship going forward but said this will not hinder the union from fighting for teachers’ rights.

“This time around we have put it squarely and barely that teachers have an irreducible minimum demand. Teachers want money and not stories,” he said.

Knut also wants TSC to address the issue of payments for the Teachers’ Professional Development which are footed by the teachers.

Oyuu said TPD is a good idea that will help teachers, but faulted TSC for failing to sensitize teachers about the programme.

“We however discovered that TSC did not invest in sensitizing teachers on its need, usefulness, involvement, and its benefit, and that’s why it was met with resistance,” he said.

Teachers are supposed to pay Sh6,000 for TPD, which Oyuu said should be catered to by the government.

“The union in its intervention canvassed to have the National Assembly appropriate Sh4.5 billion for the purpose of purchasing modules in TPD, this money was availed,” Oyuu said.

Teachers are required to undertake in-service professional training lasting five years and get their certificates renewed.

The professional development will run for 30 years and has six modules each lasting five years.

KCSE 2020 Top Schools that produce As during national exams

TSC: LATEST CLARIFICATION ON JULY SALARY INCREMENT FOR ALL…