PAIN AND GRIEF AS CURTAIN FALLS ON LADY MAUREEN, THE QUEEN OF OHANGLA; READ HER PAINFUL EXPERIENCES IN HER BIOGRAPHY BELOW

By News Pro Team Last updated Jul 11, 2020
PAIN AND GRIEF AS CURTAIN FALLS ON LADY MAUREEN, THE QUEEN OF OHANGLA; READ HER PAINFUL EXPERIENCES IN HER BIOGRAPHY BELOW
0
Share

PAIN AND GRIEF AS CURTAIN FALLS ON LADY MAUREEN, THE QUEEN OF OHANGLA; READ HER PAINFUL EXPERIENCES IN HER BIOGRAPHY BELOW 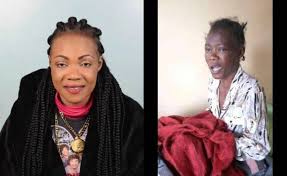 Ohangla fans have suffered a huge blow after the demise of Maureen Achieng popularly known as Lady Maureen.

According to the family, Lady Maureen died on July 11 at Uriri in Migori County after a long illness.

Some of her hit songs include Gor kogallo, Raila, Alemo, Jogi Jokuoge among others.

The Ohangla maestro will be remembered for her many praise songs for ODM leader and former Prime Minister Raila Odinga.

Consequently, Mama Ida Odinga and her husband who is currently out of the country have joined other Kenyans in mourning the late music star.

“I am shocked at the news of her death. She was one of the best composers of Ohangla hit songs, May her soul rest in peace,” said Ida.

“My condolences go out to the family, friends, and fans of Lady Maureen Achieng’. Achieng was immensely talented and very dynamic; always adapting to the new trends in the very competitive music industry. May she Rest In Eternal Peace,” wrote ODM leader Raila Odinga on his Facebook page on Saturday.

On February 25, 2020, the Daily Nation reported that the Ohangla music icon was stranded in hospital after her mother declined to take her in following an unresolved conflict.

According to her caregiver Ms. Nancy Achieng’ the musician’s mother had barred her from taking the singer to their home.

She called upon well-wishers to assist her in securing a rental house for the songstress citing insufficient funds.

The musician was later taken in by her cousin amid a stern warning from her mother. Her cousin Fredrick Odhiambo rescued her and took her to his home at Pap Onditi in Kisumu.

Lady Maureen’s mother accused her daughter’s friends for deserting her during her hour of need. Her mother, Margret Akinyi expressed her frustration and disappointment following her daughter’s predicament.

Aklinyi sounded a warning to artistes who squander their newfound wealth in their heyday. “Remember where you came from and your parents as well. If God blesses you, don’t squander your money with strangers or rather people who do not advise you to invest because when you go broke, they all run away and it is us, parents, who suffer, especially if you are sick just like my daughter’s case,” she said.

On June 12, 2018, the songbird was taken ill and admitted at St. Francis Community Hospital in Kasarani, Nairobi.

She got diagnosed with hypertension a condition associated with low blood pressure. She also had a growth on her back and paralysis on the right side of her body.

Lady Maureen was hospitalized barely two months after being released from prison in Mwanza, Tanzania. She had been arrested alongside her 15 band members for allegedly working in Tanzania without permits. They were behind bars for nine members, a move that the musician described as a ploy to tarnish her good name through bad press.

HOW TO ACCESS THE UNIVERSITY OF NAIROBI, UON E-LEARNING PORTAL AND DOWNLOAD ASSIGNMENTS AND EXAMINATIONS; A DETAILED GUIDE TO eclass.uonbi.ac.ke PORTAL ONLINE

Ministry confirms Form 1 placement will be out tomorrow and…