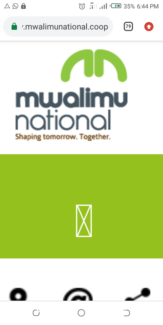 Teachers, shareholders at the Mwalimu National SACCO are yet to absorb the rude shock they were treated to following the mere pittance that was credited to their FOSA account as dividends for the fiscal year 2020.

The management also exempted capital shares of 20,000 during the calculation of dividends.

Instead the management team raised capital shares from 20,000 to 30,000 claiming the sacco has been struggling to stand on its feet recently.

This is the the third time the management has declared dividends’ calculation rate that is below par given that teachers  have invested heavily in the sacco.

The management on many occasions has shifted blame and pointed fingers at spire bank that has been counting huge losses since 2015 and Kisaju park houses that are yet to be sold.

However from the conversation that was going on on WhatsApp between a delegate and a member supervisory team whom the name is withheld to avoid victimization, there is a likelihood that teachers money is being swindled by the Sacco management team.

“My brother,delegates didn’t want anything less than what was declared for the financial year 2019, but the directors ganged with the supervisory board and senior MNS staff and hid behind Sasra to con teachers,” Onyambu revealed.

Mwalimu Sacco, How to calculate dividends 2021

Mwalimu National SACCO pays its esteemed members dividends based on their deposits annually.

However, in the year 2021, members were at sea, finding it difficult to understand how the amount that was paid as dividends was arrived at.

Newspro has dug deep to unearth the formula used by the sacco.

Mwalimu Sacco decided to calculate dividends of members at monthly level. This means that contribution made at the month of January accrued more dividends compared to subsequent months.

It is important to note that dividends are paid at two levels of percentages; 13% of capital shares that is usually 20,000 for each member and 12% of the amount of shares.

HOW TO CALCULATE  DIVIDENDS AMOUNT IN KSHS

Note that dividends is subject to the following deductions:

Amount expected in your account (net) is the Actual amount (as Calculated above) minus any advance amount taken.

According to one of Gusii Mwalimu Sacco delegates who sought anonymity, the method above was reached in a bid to encourage members to start saving as early as January.

Members who make huge deposits close to the end of the year won’t reap big as per their expectations.

TSC list of teachers to be vaccinated against Covid-19 by June, Check if you fall among the target group

KNEC: How to apply for Examiner,Supervisor,Invigilator and…