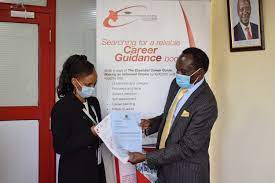 The Kenya university and colleges placement service KUCCPS through its CEO mercy Wahome has officially dismissed unfounded claims that the 2022 KUCCPS cut-off for both boys and girls has been raised from C+ to B- Minus. In an official circular dated April 26, she stated that all 145,145 candidates who met the minimum university entry requirement of C+ or higher will be offered admission to public and private universities through government sponsorship in Kenya.

What are cut-off points?

The Kenya Universities and Colleges Central Placement Service (KUCCPS) has explained what cut-off points are and how they influence the selection of students to higher institutions of learning (Universities, Colleges, and Tvets).

Wahome also stated that all 826,807 who did their KCSE this year will be placed in institutions of higher learning across the country.

In a statement, she indicated “Candidates who scored grades ranging from E to C plain will be eligible for government sponsorship in Technical and Vocational Education and Training (TVET) institutions.”

If you are applying for Kuccps courses or making revisions, then this is your chance to know about the Cut off points for various courses.

Cut-off points are only available after applicants have been placed and have joined university/college.

These cut-off points are reviewed on a yearly basis and they heavily rely on candidates’ performance at the Kenya Certificate of Secondary Education (KCSE) examinations.

During the release of these examinations last week, Education Cs. Magoha emphasized the importance of focusing on improving TVET institutions, where the majority of Form Four leavers will enroll as well.

Magoha further made it clear that all candidates were eligible to advance to higher learning institutions based on their grades.

Kuccps CEO on the other hand mentioned that only those who apply for placement in various universities and TVET institutions will be considered for placement under government sponsorships.

In the released examinations, few candidates received a C+ on the transition exam with nearly 700,000 students failing.

It was equally observed that students who received a D or higher, on the other hand, have a second chance at higher education through certificate and diploma programs.

At the same time Students who received C and C minus grades in the Technical and Vocational Education and Training (TVET) program are eligible to enroll in diploma courses at any of the country’s 31 institutions.

Another 495,686 candidates who received a D+ or lower can enroll in certificate programs

As an applicant, you have been provided with cut-off points of the previous four years to use as a gauge of how competitive a course is.

To figure out your cutoff points, select the course you want from the list below and look at the four essential subjects (Cluster Subject 1, 2, 3, and 4). Only after logging onto your kuccps account will you be able to see the courses.

Then, to compute your points, click on Cluster Point Calculator

When will the first-course revision start?

In June, the first-course revision will commence. You will have the opportunity to edit the courses that you picked during the initial revision.

What if I didn’t choose any secondary school courses?

There’s nothing to be concerned about. During the first course revision, you will have the opportunity to create your own courses.

Candidates with a grade of C+ or higher in the KCSE can apply for government-sponsored degree programs, formerly known as JAB.

KUCCPS 2022-2023 Cut Off Points and Requirements Circular to Universities, Colleges and TVETs

Teachers in the Moon after TSC Gives the Following…

TEACHERS TO REPORT TO THEIR RESPECTIVE SCHOOLS TWO WEEKS…