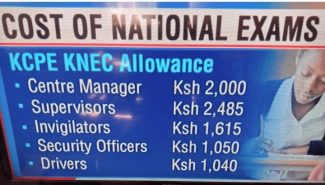 In spite of the numerous complaints leveled against the Kenya National Examinations Council, KNEC, over delayed payment of examiners, center managers, supervisors, and invigilators, the council has now confirmed that even in the future, KNEC will still not pay the contracted professionals in time.

This is after the Council confirmed the payment of contracted professionals who manned the 2021 KCPE and KCSE national examinations administered between March and April this year. Unfortunately, examiners who spent long hours, sometimes being forced to work under very unfavorable conditions in the wee hours of dawn will continue to wait for the release of their dues.

According to the Council, the 2022 academic year is a tight one with the examiner expected to administer five national examinations in less than a year. Besides the tight schedule, KNEC has justified the delayed payment for examiners citing the rigorous process involved in the verification of examiners’ data.

According to the newly appointed KNEC boss Dr. David Njeng’ere, the back only stops with the procedure of verifying examiners’ details. Therefore the issue is not delayed pay but verification of data.

“It is not a delay but an issue of procedure and that is why it takes time,” he noted.

This process will not however go on for long given that the Council is slowly doing away with the national marking exercise.

This follows the introduction and the rollout of school-based assessments that are continuous-formative in nature.

In December, knec will for the first time conduct a national examination at grade six after which learners will join a junior secondary school in February 2022. According to CS Magoha, all these learners will get placed in secondary schools near their homes so that they can become day scholars.

Besides KPSEA and SBA assessments, the education ministry will also place grade six learners in secondary schools based on the choice of subjects especially now that CBC has incorporated indigenous languages and other technical subjects such as Agriculture and Home Science.

Contrary to the expectations of many who thought that KPSEA will cover over 11 learning areas-subjects, the first KPSEA examination will cover five broad subjects namely Mathematics, English, Integrated Science, Kiswahili, Creative Arts, and Social Studies.

The most perturbing is the fact that the KPSEA national assessment will not involve Insha and Composition writing.

KPSEA tests will also provide candidates with multiple choice questions which means that KNEC will no longer engage the services of KCPE examiners given that multiple questions can be marked by optical marker readers, OMR machines.

TSC Salaries and Promotions Online; TSC Ordered to Draft a Budget for Promotion of Teachers with Higher Qualifications

Do it right! Here is a list of essential documents for…