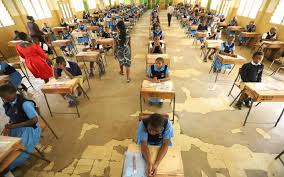 The 2021-2022 Kenya Certificate of Primary Education (KCPE) examinations end today to usher in the marking exercise which is expected to take two to three weeks.

The candidates will complete the last paper — Social Studies and Religious Education — at 10.45am and begin the wait for the results that will be followed by placement in secondary schools.

Even as the examinations drew to a close, teachers were warned against taking mobile phones to the examination rooms or taking photographs of the papers and posting them online.

“Nobody must enter the examination room with a cell phone. That includes the centre managers, who must leave their phones in the offices,” said Education Cabinet secretary George Magoha.

“We were able to pick certain centre managers taking images of the question paper several minutes after the examination had started. This is not acceptable and we are not going to take it lightly,” Prof Magoha said. He was speaking in Nyeri town where he oversaw the opening of the container for Nyeri Central.

On Monday, a centre manager and six police officers from Wajir North Sub-County were interrogated and had their mobile phones confiscated following reports of suspected exam malpractice at one of the primary schools.

The Early Learning and Basic Education PS Julius Jwan also warned teachers that they risk being punished since the practice constitutes an offence. The warning also applies to journalists covering the exams. He said that it creates an impression that the exams have been leaked.

“You are barred from taking pictures in the examination room when the papers have been opened,” he told exam centre managers in Homa Bay town when he opened the container at Homa Bay County headquarters.

“Some people may use this to create an impression that the exams are not credible,” he said, adding: “Everyone manning the examination must ensure the credibility of the test. All our security officers should be alert in ensuring that all regulations are adhered to.”

The examinations were administered in challenging conditions in some insecurity-prone areas in the North Rift where candidates had to be relocated to safer areas. Baringo and Elgeyo-Marakwet counties where families have been displaced by a wave of bandit attacks have been most affected.

Government officials from Baringo indicated that they had traced all candidates who were displaced from their villages. The county commissioner, Mr Abdirisack Jaldesa, said this had been done through village elders.

More than 15 centres in banditry prone areas in the region have been merged to ensure the safety of candidates.

“In Marigat, we have relocated candidates from Kasiel and Sinoni to Mochongoi Secondary School, while those from Kapindasum and Arabal primary schools will write their exams at Chemongorio Primary School,” explained Maalim Mohamed, the Rift Valley regional coordinator.

“Those from Tuiyotich and Kapkechar will be housed at Kapel and Karne primary schools, respectively,” he added.

In Baringo North, candidates from Kapturo and Chepkisin primary schools have been relocated to Toborai Primary School.

In Turkana, the county commissioner Muthama Wambua, said besides the two police officers deployed to each of the 266 examination centres, officers from the Rural Border Patrol Unit and the Rapid Deployment Unit have been sent to schools in Kapedo, Nadapal, Kaakong and Kainuk villages that have recently been affected by insecurity.

“We therefore don’t expect any interruption from bandits. Anyone causing interruptions will be dealt with accordingly,” he said.

Dr Jwan also cautioned school heads and parents against engaging learners in tuition during the third term holiday which began last week and ends on April 25 when schools are scheduled to open for the 2022 academic year.

The PS said the revised term dates considered every challenge that may arise and the time provided for learning is enough for covering the syllabus.

“What we are encouraging now is for teachers and parents to allow learners to spend the holiday at home. This is the long holiday that they have,” Dr Jwan said.

The 2022 academic year will be the shortest, taking just 29 weeks instead of the usual 39. First-term will take 10 weeks, from April 25 to July 1. There will be a one-week holiday before learning resumes for the second term from July 11 to September 16.

After a week’s break, third term will take nine weeks from September 26 to November 25. Thereafter, learners in Standard Eight and Form Four will sit their KCPE and KCSE examinations between November 28 and December 23.

Education Chief Administrative Secretary Sara Ruto called on political leaders to keep off learning institutions during the examination period and long holiday and also when schools reopen for Term One.

“We need to restore sanity in our schools. We know schools are used as voting centres but we urge politicians to avoid the institutions during their campaigns. Politicians should stop giving schools gifts or branded campaign materials. They need to divorce their personal ambitions from the education of our children,” she stated.

KCPE Exams to be marked within the next two weeks CS Magoha says. Expect results by end of March