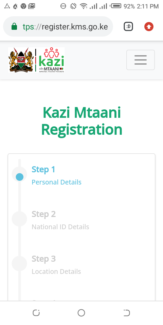 Breaking News Kenya Today; successful applicants of the Kazi Mtaani Phase 3 recruitment are a lucky lot following the increase in pay from the previous Kshs 10,000 per month to Kshs 16,000.

Announcing the good news, Housing PS Charles Hinga confirmed that indeed there is light at the end of the tunnel for most unemployed Kenyan youth following the extension of the Kazi Mtaani contract to June 2022.

How To Register for and Apply For Kazi Mtaani Programme via…

MAGOHA: TEACHERS CAN PREPARE TO RESUME DUTY IN THEIR VARIOUS…

Housing Principal Secretary Charles Hinga has announced the extension of Kazi Mtaani programme until the end of next year in June, offering relief to thousands of youths enlisted in the project.

In a statement, Hinga said the Kazi Mtaani Phase 3 is expected to be “bigger and better” and will be implemented in over 900 informal settlements across all 47 counties.

“The expanded phase will equip the youth with skills aimed at creating job opportunities as well as enable them to engage in self-employment. The youth have also received extensive training on life skills such as setting up businesses, HIV/Aids prevention, mental health and counselling, and basic skills in masonry and carpentry,” he stated.

In the first and second phases of the programme, over 280,000 youths were employed from 1,100 informal settlements in the 47 counties.

PS Hinga pointed out that so far, over Sh 10 billion has been utilized in the programme which has put food on the table of hundreds of thousands of Kenyans and enabled thousands of youths to start small thriving businesses after COVID-19 rendered many jobless.

“The government has rolled out a web-based application to recruit and pay youth across the country in the Kazi Mtaani programme to safeguard public funds,” said Hinga.

“The recruitment process, which started last Friday ahead of the official launch next month, is being carried out via an online registration portal known as Kazi Mtaani Management System (KMMS),” he said.

The Kazi Mtaani Program was launched in April 2020 as a local economic recovery initiative and a form of social protection designed to cushion the youth and vulnerable citizens in informal settlements.