KCPE 2020 Form One Selection Results Out Today: This is How You Can Check Which Secondary School You Have Been Placed

KCPE 2020 Form One Selection Results Out Today: This is How You Can Check Which Secondary School You Have Been Placed 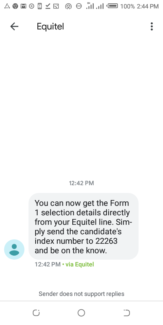 Form one placement results 2021 are one of a kind. This is simply because unlike previous times, the KCPE 2020 candidates sat for their national exams over five months later-in March 2021 necessitating the delayed release of the Kenya Certificate of Primary Education, KCPE results and consequently the release of the form one selection results.

Currently, secondary schools are short of two forms-form one and form four.

The good news is that the much anticipated Form one placement or rather selection results have finally been released by the Education CS Professor George Magoha today on June 15, 2021.

This signals that the long wait for incoming Form One learners and their families to know the secondary schools they have been admitted to has come to an end today, after selection results were officially released.

The results were earlier expected on May 28, but were pushed back by two weeks over allegations bordering on the adulteration of the results.

Form One Selection: How to change form one Placement in …

2021 form one selection/placement and admission to national…

Photos of Top 10 Most Popular Schools in Form One Selection

How 2022 KCPE Candidates Can Check Form One Selection in…

Top 15 Best, Most Selected High Schools by Form One

Another technical hitch arose after KCPE top performers coincidentally went for the 18 traditional national schools leaving out national schools in far flung  and insecure areas such as Garissa, Mandera and Lamu.

The technocracts had to therefore devise a new formula to ensure that they deliver credible results in the long run.

Two months after release of the Kenya Certificate of Primary Education (KCPE) exam results, Education cabinet secretary George Magoha has announced the outcome of the secondary school selection that has been going on.

The form one selection results have been released for all categories of schools, from national to sub-county, unlike before when selection to national schools would be announced first.

The CS has assured that all the 1.18 million candidates who sat the KCPE have been placed in secondary schools.

The Education ministry places candidates based on their performance, availability of vacancies and the choices of secondary schools that they made when they registered for the examinations. Prof Magoha said the computerised process will be “water-tight, credible and of high integrity” with no room for manipulation.

The learners, who have been out of school since they completed the KCPE examinations on March 24, will join secondary school  on August 2,  2021 and not mid next month as earlier stated when the Term One of the reorganised calendar begins.

Competition for form one places as usual was toughest for national schools and other top-performing schools.

However, new placement rules by the ministry made it harder for learners to be admitted to schools they did not prefer or go for which may necessitate many transfer applications to other schools.

The official 2021 Selection/  placement results are currently available on the National Educational Management Information System (Nemis) and transfers will only be permissible through the same system.

How To Get Your Form One Selection/ Placement Results 2021

TSC Mass Recruitment July 2021:  TSC Announces 5000 Teaching Posts. This is How You Can Apply for the 5000 TSC Teaching Vacancies to be Filled in July 2021