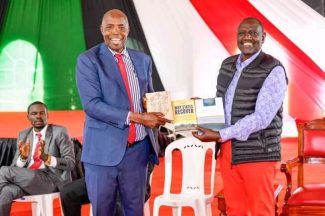 Ezekiel Machogu is a reputable Kisii politician with a clean legacy in the National Assembly of Kenya.

The legislator brags of multiple development projects with socio-economic benefits. Honourable Ezekiel Machogu Ombaki biography gives us a quick glimpse of his achievement record and new found ambitions. Read his biography below;

Ezekiel Machogu may not be a household name in Kenya but he appears in the list of Kenyan politicians who place their people’s interest ahead of theirs.

Ezekiel Machogu Ombaki is famous for serving as a Member of Parliament in the Nyaribari Masaba Constituency.

The Kisii lawmaker is always in the spotlight for his soft-spoken personality. Even so, he is a man of few words and an abundance of ideas.

How old is Ezekiel Machogu Ombaki?

He is still youthful having been actively involved in governance since 1976.

He proceeded to Agoro Sare secondary for his A-Levels and later the UoN for his tertiary learning.

Machogu eventually graduated with a Business Administration Degree from the University of Nairobi in 1979.

MP Machogu started his career in 1976 as a District Officer, working under the Office of the President.

In 1989, Machogu became a District Commissioner maintaining the position until 2008.

Ezekiel Machogu proceeded to work as a Senior Deputy Secretary for the Public Service Commission between 2008 and 2016. Thereafter, he joined politics in a full swing.

Machogu joined competitive politics in 2017 as an aspirant Member of Parliament for Nyaribari Masaba Constituency.

His first shot at the MP position turned successful. As a result, he succeeded MP Elijah Moindi in the parliamentary seat.

He has since repositioned his political standing with excessive allegiance to President Uhuru Kenyatta.

MP Ezekiel Machogu was recently mentioned in a land grabbing case against an unnamed woman.

The said property, which sits at Kisii Mwembe Estate, left Machogu’s name tainted in 2019. The case is allegedly ongoing.

The MP from Nyaribari Masaba Sub County prefers to keep personal information away from media scrutiny.

For this reason, some details about his childhood and closest relatives are still missing.

Also from Machogu’s birthplace are Prof Sam Ongeri and the late Hezron Manduku.

Ezekiel Machogu salary and net worth

Ezekiel Machogu wealth on the other hand is in a tune of millions with exceeding investments in real estate and businesses.

For instance, he is a big-time real estate investor along Jogoo Road in Nairobi County.

The MP has not yet released his office phone number and email address.