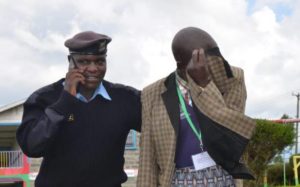 They confiscated rubbers, mobile phones and pieces of tissue papers.
Among those arrested is the school proprietor Ms Tabitha Wambui, invigilators, the supervisor, and the centre manager Mr Musa Mirobi.

Four other suspects have been detained to assist with the ongoing investigations.

SUSPICIOUS MOVEMENT BY THE STAFF
Preliminary investigations have revealed that one of the teachers took photographs of the examination papers using a school mobile phone before sending them to teachers who were waiting in the proprietor’s house.

The teachers then wrote the answers on pieces of tissue paper and rubbers before disseminating them to candidates who would then copy.
Officers became suspicious of the elaborate systematic movement, launched an investigation and unravelled the racket.
According to police officers, the cheating materials were impounded. The suspects will be arraigned today. 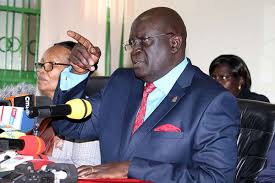 KCPE CANDIDATE DIES AFTER BEING ELECTROCUTED AT AN EXAMINATION CENTRE YESTERDAY
A KCPE candidate in Nyamira County has died after being electrocuted in an examination centre.
Peter Mokua, 15, was a candidate at Gitwebe Primary School in Magwagwa, North Mugirango constituency.
Mokua was pronounced dead on arrival at Esanige Health Centre.
Confirming the incident, the County Commissioner Amos Mariba said the candidate was climbing a water tank within the school compound when he unknowingly touched a hanging live wire which electrocuted him.

A primary school teacher was arraigned yesterday at the Makadara Law Court and charged with possessing unauthorized KCPE exam materials.
Wanja Muchiri pictured above is said to have nabbed at Mus’ab Educational Centre in Starehe Sub-county with materials suspected to answer the English language paper.
Ms Muchiri was supervising KCPE examinations at Mus’ab Educational Centre when she was taken in by the police.
It is the school headteacher who tipped the police from DCI Starehe after he got wind of the teacher’s plan to abet examination malpractice.
Ms Muchiri denied the charges levelled against her and was released on a sh 100, 000 bond.