Business has been brought to a standstill in Molo Town following a heavy downpour yesterday which resulted in Mtoni Polisi River bursting its banks.

Residents of Molo and other surrounding towns such as Turi, Elburgon and Total have henceforth been forced to use an alternative path via the dilapidated railway line to access the town and the two bus stages-Town and Keep Left.

Motorists have also been obliged to use the narrow passage to access the town.

Being an agricultural town, many lorries transporting food such as cereals, vegetables, carrots, peas, tomatoes and Irish potatoes are still holed up in Molo.

Nissans which normally ply the Kisii-Nakuru route and pro boxes which carry passengers from Total to Molo have also been forced to park as they await help from the government.

Some of the affected businesses include the famous Home Budget Supermarket in Molo, Mtoni Polisi Tree Nursery, NHIF-Molo Branch, the biggest Computer Shop in Molo, and Musoni Microfinance Enterprise.

St. Joseph’s Nursing Home, Molo will also witness a low customer turn-out since part of the Mtoni Polisi River has affected the Posa-Keep Left Road used by many patients to access the Hospital.

The police have also arrived but they are still stranded since they cannot compete with forces of nature. 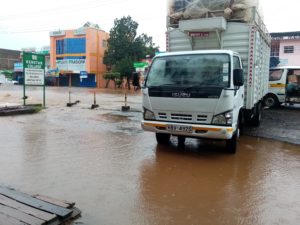 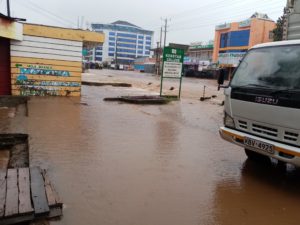