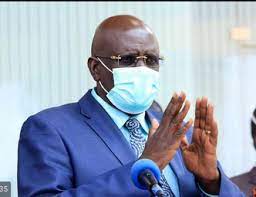 Marking Of KCSE National Exams Nears Completion, Examiners to Depart by Tuesday Next week as CS Magoha Gives Clarification on the Release of the 2021 KCSE Results

2022 KCSE examiners contracted by the Kenya National Examinations Council, Knec to mark this year’s KCSE national examinations for compulsory subjects such as English are still held up at the various Knec designated marking centres despite reporting earlier than the rest. The examiners were expected to leave the designated Knec marking centres which comprise teacher training colleges such as Thogoto and secondary schools within Nairobi and its environs by Friday but due to the higher number of candidates taking compulsory subjects, they may leave early next week.

On the contrary, examiners hired by Knec to mark KCSE Examinations for elective/optional subjects have already cleared and left the marking centres.

Education Cabinet Secretary, Prof George Magoha earlier on stated that this year’s KCSE marking will be carried out in accordance with tight and meticulous procedures in order to mantain exam integrity.

Prof Magoha stated that the exercise will take place in 35 locations and will be concluded on Friday this week, allowing candidates to transition to Universities,colleges and technical institutes.

According to the Kenya National Examination Council (KNEC), 831,015 candidates had registered for the KCSE exam in 10,413 centers for the academic year 2021.

Exams are marked in a few selected secondary schools and tertiary institutions based on the subjects.

According to University Education and Research Principal Secretary Simon Nabukwesi, KCSE candidates will begin enrolling in institutions as early as June this year.

Entry into vocational institutions, according to Mr Nabukwesi, would begin in September.

“As soon as the KCSE results are revealed, the Kenya Universities and Colleges Central Placement Service (KUCCPS) would begin putting applicants in institutions.” There won’t be any squandering of time. When Mr Nabukwesi monitored exam distribution in Nakuru, he stated, “Candidates would be chosen to join institutions in early June.”

Those enrolling in TVET institutes will do so in September, he added.

“Those who enroll in colleges and vocational institutes in September will do so,” he continued

He also stated that the institutions will be able to accept all of the KCSE candidates in 2021.

Exam malpractice was recorded in numerous locations of the country during the administration of the written exam.

The CS, on the other hand, said that no exam papers were leaked and that the attempts to facilitate cheating were limited to certain examination officials photographing question papers after retrieving them from the containers.

He claimed that no examination papers had leaked due to police and Knec personnel’ strict security measures.

According to Magoha, all security officers manning the examinations are required to sit in positions where they have a “daily complete view of the examination materials.”

Several candidates, on the other hand, explained how they obtained the KCSE leaks before the examinations began.

The students, who asked to remain anonymous, told the media that they utilized social media to communicate with clients who had access to the papers.

They claimed that an hour or two before the exams, the leaked papers would be sent to their phones.

One candidate described how he scribbled the answers on a napkin and snuck them into the exam room.

“I got the exam paper two hours before the exam, jotted down the information on a napkin, and he brought it into the exam room successfully,” he told NTV.

The candidate went on to say that the authorities had a difficult time tracking down the perpetrators because much of the contact took place on social media.

“We received all Kiswahili, CRE, and Chemistry papers, as well as practicals.” We would frequently receive the papers an hour or two before the exam. So the leakage was present, and the administration should cease denying it,” he said.

The applicant confirmed that some of their supervisors were aware of the exam malpractice but did not take proper action, when asked how the plans came into play.

Teachers, parents, and students are all concerned that their exams may be canceled as a result of this disclosure.

Last year, the results of 287 children who took the 2020 KCSE exam were canceled due to different exam malpractices.

According to Cs Magoha, there was substantial evidence that the 287 students engaged in exam malpractice.

“Out of the 287, 211 had prohibitedmaterials in the examination room… “There were 45 mobile phones,” Magoha stated.

TSC Directs Schools to Observe the New Guidelines Below When Identifying  Mentors, Coaches and Champions