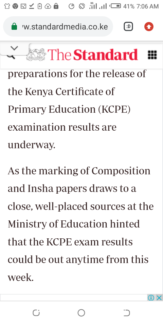 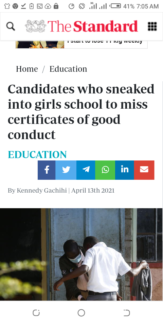 The marking and analysis of the Kenya Certificate of Primary Education, KCPE Knec exams is set to come to a closure this week.

All eyes are therefore trained on the official KCPE release date. According to sources close to the Education Ministry and KNEC, KCPE 2020 candidates who sat for this year’s national tests should expect results any time from now.

Furthermore, the marking of Kiswahili Insha and English Composition scripts is also complete since the contracted KNEC Examiners have already left the designated marking centres.

Only chief examiners and other key officials were left behind to speed up the process of analyzing and releasing exam results as the other markers received special passes on Sunday to travel back home.

Once CS Magoha gives his final remarks on the KCPE 2021 results, Individual candidates’ Official results will start streaming in since he will provide the official Knec SMS code -20076 through which results can be accessed instantly.

Instructions on how to receive KCPE 2021 individual Knec results

The candidate should compose an SMS with their index number followed by the word KCPE to 20076 (Official KCPE Knec Code for results) immediately after the release of results.

Since this is a charged SMS service, ensure that your line has got enough airtime that is at least Kshs 25, the service charge for a single SMS irrespective of the mobile service provider.

The Kenya Certificate of Secondary Education Knec exams on the other hand which kicked off more than three weeks ago are almost over.

This year’s KCSE has however been marred by several challenges including cheating and violence.

Several incidences of examination malpractice have been reported with teachers  including principals taking the centre stage.

Some of the teachers who were actively involved in the cheating and leaking of KCSE 2021 exams have been charged while others still remain in police custody awaiting their trial.

Some KCSE candidates have also exhibited unbecoming behavior. The latest case involves a girl who after being caught with Mwakenya notes for CRE paper II lost her temper and attacked a police officer who allegedly snatched her Mwakenya.

The police officer fearing for his life had to request for reinforcement. The officers combed the dormitories and several phones and Mwakenya notes used in exam cheating got discovered.

The centre manager, at Moi Kapcherop Girls has been arrested alongside 4 candidates and other officers Manning the centre for further questioning.

In another shocking incident, 70 KCSE candidates sneaked into a girls’ dormitory.

According to the Principal Secretary at the State Department of University Education and Research Simon Nabukwesi, the government is taking the incidents seriously.

Nabukwesi who oversaw the distribution of exam papers in Nakuru spoke on the backdrop of an incident where 70 male candidates sneaked out of school on Thursday night.

“The appropriate measures shall be taken against the students after their last paper. They will miss their certificates of good conduct until they satisfy security agencies that they have reformed,” he said.

Most of the Kenya Certificate of Secondary Education (KCSE) candidates are expected to sit their last papers by end of this week.

Basic Education Permanent Secretary Jwan Julius has directed all County Directors of Education in the counties placed under lockdown to facilitate smooth and safe travel of the learners.