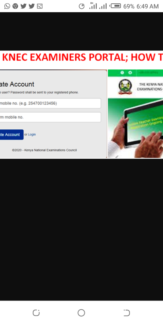 The more than one million candidates who were registered by the Kenya National Examinations Council, Knec, have got less than two weeks  to sit the national primary and secondary examinations. 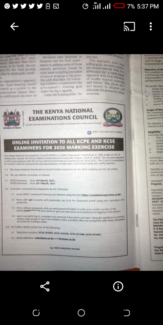 Speaking in Nairobi on March 16, government spokesman Cyrus Oguna  said that the preparations for the two national tests are complete to ensure the examinations run smoothly, even in highly volatile areas  and places adversely affected by flooding.

Candidates will sit their last paper on April 21.

The Kenya Certificate of Primary Examination (KCPE) is set to begin next week on March 22 and end on 24.

“Practicals already started and on paper exams will start in a few days. The government has put all necessary measures in place including places hit by insecurity and floods,” said Oguna.

In Baringo where most schools were submerged by the ballooning Lake Baringo, Oguna said exam registration for affected candidates was done in the neighbouring public schools.

“There has been a concern in regard to areas hit by insecurity like Kapedo and Merti and facilities submerged, but examinations will be conducted across the country,” he said.

“No student will be denied the chance to do the examination due to insecurity. Examination centres have been set up even in the areas that had issues,” he further noted.

“We are talking about an examination when we’re still in the middle of Covid-19 pandemic.

Despite the disruptions caused by the pandemic we can talk of being ready to conduct an examination when it looked like a lost academic year for the students,” said the spokesperson.

Oguna noted that an examination command centre has been established for quick response to incidents that may arise from schools in far-flung areas.

About 28,437 examination centres have been established for KCSE candidates while 10,437 have been set up for Class Eight candidates.

This has prompted the kenya National Examinations Council, Knec to increase the number of contracted Professionals who will oversee and maintain a level play-ground for all the candidates.

The council has already posted a list of the 2021 Knec contracted professionals online.

Knec has at the same time announced the official opening date of the knec examiners portal online.

KCPE Insha and composition examiners will access the portal to accept and download their invitation letters as from March 16.

Contracted KCSE 2020 knec examiners will start accessing the portal as from  March 22.

What, when and how knec will pay the 2021 KCSE, KCPE contracted Professionals; Payment rates for Supervisors, Centre Managers and Invigilators