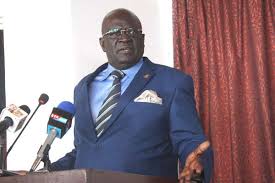 With the IEBC busy clearing candidates for various elective positions ahead of the 9th August general election, quite a number of candidates have found themselves in trouble with their academic qualifications. So much has been unearthed leaving some candidates with bad eggs on their faces. The latest trending case has been around the Nairobi Gubernatorial seat aspirant, Mr. Sakaja Johnson whose alleged degree acquisition has been revoked by a university from Uganda( Teams University)

Prof. George Magoha, the Cabinet Secretary for Education has been compelled to weigh in on this issue over the ongoing controversy around the academic qualifications of candidates seeking various elective positions in the fast approaching 9th August national Elections.

The good professor while speaking at the inauguration of new CBC Classrooms at Pangani Girls, Nairobi, said that it was illogical for aspirants to continue attempting to prove their educational credentials despite knowing they were ineligible!

He advised aspiring politicians seeking to be elected to stop emphasizing the acquisition of university degrees to gain credibility.

This is what he had to say, ” I, Magoha, son of Magoha, will not fight to say I am not what I am not, and am not targeting anybody. It is very shameful that people who want to be our leaders, and they are many of them, are fighting to prove that”

” If you ask me who my classmates were 47 years ago, I will give you a battery of them. They are all over the world”, Magoha continued.

Speaking of the University of Nairobi, Where he served as the Vice-Chancellor, the Prof stated that contrary to how politicians make the process onerous, it is very easy to clarify the educational credentials of an individual. He continued to observe that the majority of higher education institutions have digitized systems and can easily identify an alumnus!

” I want to urge our politicians and more so the parliamentarians to stop destroying our Universities. Our Universities need to be regimented and especially in the UON…that if you want transcripts of someone who studied there in 1975, you will just touch a button and get the transcripts”, Professor Magoha said.