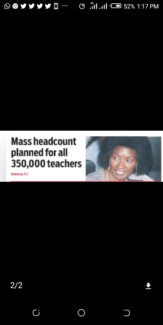 The teachers Service Commission is Constitutionaly Mandated under article 237 to register, hire, Transfer, promote and excecise disciplinary control over Teachers.

Persuant to its mandate, the commission has scheduled a headcount exercise that will kick off in April.

According to the standard Wednesday, an average of 35000 teachers will be counted Countrywide in over 30000 primary and secondary schools.

The biometric Registeration excercise was scheduled to be done last year in a pilot basis but was shelved following the COVID-19 scourge.

A total of seven counties have been identified as April 22 becomes the official date for the start of the piloting excercise with the national rollout set for August/September.

These counties include Uasin Gishu, Homabay, Bungoma, Nyeri, kilifi, kitui, and Garissa. The selection was due to the fact that the counties represent both rural and urban set-up which will give good lessons for the national Rollout.

A total of 143 institutions which include primary, secondary and teachers training colleges will be selected from the seven counties on pro-rata basies.

According to a concept report by the commission, the following teachers are targeted for action.

One, Teachers with fake certificates of Registration. Some teachers who acquired TSC Registeration certificate and TSC number didn’t follow the right procedure hence they are not qualified even if they are still drawing salaries from the commission.

Two, teachers in overstaffed schools. These ones will be transfered to other areas in a move to optimally utelize the teachers. Teachers like teaching in urban schools where there are a number of amenities hence overstaffing in those schools while those in villages remain understaffed.

Three, teachers who faked their Retirement age to lengthen their years in service. These ones will be identified so that their Retirement process and Preparations Begin immediately. They may also face the full force of the law for faking age.

Finally ghost workers who are on the payroll but they aren’t working anywhere. These ones will also be smoked out as the payroll is cleaned up.

Teachers have got two days to apply for 280, 000 exam jobs at the Kenya National Examinations Council before the set deadline

TSC Advertises the following Teaching Vacancies to be…

KNEC REGISTRATION 2020: HOW TO REGISTER A NEW INSTITUTION AS…

TSC To Employ All Secondary School Teacher Interns on…