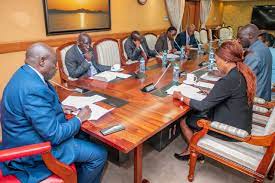 TSC Recruitment Merit Lists Out Next Week as Senior Intern…

Full List of Counties with the Highest TSC Recruitment…

TSC plans to recruit at least 30,000 teachers in January to downsize teacher shortages in schools.

Following the maiden meeting between TSC CEO Dr. Nancy Macharia and the newly-elect deputy president Rigathi Gachagua popularly referred to as Riggy G, the plan by TSC to absorb more teachers either on permanent and pensionable terms or on internship terms has received a nod.

TSC BOSS- NANCY MACHARIA’S MEETING WITH DP GACHAGUA; THIS IS WHAT WAS DISCUSSED

On Tuesday, all ears were trained on the Kenya Kwanza Government to gauge its commitment towards boosting education by employing more teachers.

Details of what was discussed during the meeting have now emanated indicating that the Kenya Kwanza government has committed to back up the Teachers Service Commission in its noble plan of employing 30,000 teachers starting January 2023.

TSC CEO also reiterated this during the celebrations of World Teachers’ Day held at the Kenya School of Government based in Nairobi saying that teachers should henceforth look forward to better and brighter days.

“The well-being of students, as well as teachers, is a key focus for the Kenya Kwanza Government. Today, the Education Ministry PS Dr. B. Kipsang, and a team from the TSC led by CEO Dr. Nancy Macharia paid me a courtesy call to my office; We discussed various matters to do with Education including teachers’ recruitment.” Deputy President Rigathi Gachagua’s statement at the meeting.

1. Rigathi Gachagua has demanded that all teachers delocalized against their will be re_routed back to their home regions.

2. Rigathi has ordered Nancy MACHARIA to set in motion plans to recruit over 58,000 teachers by January next year.

3. Riggy G wants that Tsc Led by Nancy MACHARIA obeys all Court orders that were awarded in favor of teachers in Kenya.

The selection panel shall vet each applicant to verify that:

(i) He/she meets the requirements of the TSC advertisement;
(ii) All submitted original academic and professional certificates, as well as official transcripts are authentic.
(iii) The proof of application for confirmation of results from KNEC has been availed where the certificates are missing.

(c) The Secretary, Board of Management shall certify photocopies of the original certificates and confirm to the Sub-County Director that they are true copies of the candidate’s original certificates.
(d) Once the interview process is completed, the results must be communicated to all applicants on the same day. The successful applicant(s) shall be issued with the TSC Application for Employment Form (s).

TSC releases list of deregistered teachers per county on…