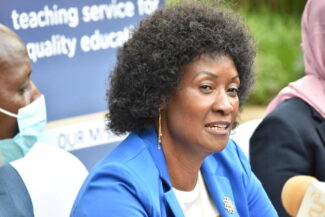 TSC Teachers’ Salaries 2021-2025: It is now clear that teachers may have to wait for four years to enjoy enhanced salaries as the employer seals any hopes for review.

Even the allowances will be laid based on old rates as has been the case under the just ended Sh 56 billion CBA which pushed teachers’ pay higher.

However, TSC Chief Executive Nancy Macharia says teachers will enjoy enhanced leave days and flexible transfers that would help bring closer families that had been separated by distance.

“To achieve the family values enshrined in the constitution, the commission shall consider transfer requests for married couples to appropriate stations/locations subject to availability of vacancies, the need for suitable replacement, existing staffing norms and proof of marriage among other factors,” a circular by Macharia says.

It will run up to June 30 2025. At the time CBA was signed, the unions said that they had agreed that TSC would revisit the salary component, in July.

Meanwhile, teachers will have to battle this  -New Salaries for Teachers 2021-2022: Hard Times For Teachers Following this Announcement that is likely to  Affect their Payslips

The teachers in the country have for along time demanded for salary increments.This in most cases has resulted into series of strikes that would always see the employer bow to pressure and finally call the union officials for the signing of a return to work formula.The former union officials had been giving the Commission some sleepless nights about this.

The teachers are staring at hard financial times ahead once more.Recently,the teachers had their salaries deducted to pay the urgency fees for those who were not in any union.They became bitter with the unions for having accepted the non monetary CBA.

The teachers slips are set to grow thinner again besides the urgency fees deduction.The Commission has rolled out the TPD modules trainings that will be made public to teachers especially on the commencement dates.Before the trainings,the teachers will be required to pay Ksh 6000 per module.If things remain constant until the end of the 6 modules,teachers will part with at least Ksh 36,000.This is apart from the other requirements such as accommodation,transport,meals and for print materials.The fee is likely to be paid directly by teachers through the check off system.This means that the slips may be affected further as TSC will deduct this money directly.Even if not through check off, their salaries will be greatly affected.This some setback to teachers.

TSC:Teachers’ Ignorance on the Law stinks to the high heavens!

(BUNGOMA COUNTY) NEMIS NEWS: HERE IS A COMPREHENSIVE LIST OF…

TSC EXCLUSIVE NEWS THIS WEEK: TSC AND KUPPET TO CONCLUDE…