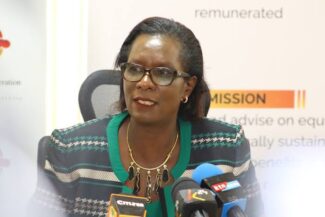 Even so, the salaries agency would regularly review the extra perks taking into account their affordability and fiscal sustainability.

SRC chairperson Lyn Mengich directed that all state agencies classify all allowances they presently pay out into the five broad categories.

The entities are expected to submit the list to the commission for review and advice by November 30, failure to which the allowances would be illegal.

The commission is also converting to paying allowances as an absolute figure and not percentages, saying percentages are to blame for the country’s ever-ballooning wage bill.

“SRC shall set, review and advice on the allowances that constitutes the five categories outlining the purpose, eligibility criteria, criteria, rate and scope,” Mengich said.

The agency data shows wage bill increased to Sh827 billion in the financial year 2019–20, an increase of Sh32 billion the previous year.

SRC has also sought to provide that allowances payable to public officers shall not be used for purposes of computing pension or gratuity.

The commission revealed that the proportion of allowances to the gross salary ranges from 43 to 259 per cent hence leading to a lower basic salary or gross salary in the public service.

Mengich also decried that similar allowances are paid as a percentage of basic salary while others are paid in absolute amounts, resulting in distortions in remuneration.

In this regard, the policy is being changed to provide that the proportion of basic salary to gross salary would be no less than 60 per cent – to be implemented progressively.

“Allowances shall be paid in absolute amounts and not as a percentage of the basic or gross salary, unless where explicitly advised by SRC,” the commission said.

Mengich said they would issue an advisory on conversion of the allowances that are currently paid as a percentage of the basic salary in absolute amounts, “while ensuring consistency across public service.”

All the same, the commission holds that the allowances applicable today would continue to be paid until the final advisory would be issued after the review.

“Allowances currently obtaining shall continue to be paid until SRC issues an advisory to public service institutions on the allowances,” the commission boss said.

She said compliance checks to enhance adherence to the policy guidelines would be conducted in July 2022, after which employees of non-compliant entities would lose salaries.

In the tough new rules, facilitative allowances paid to public service officers for working outside their duty station would be paid at the same rate across the board.

To avoid duplication, allowances that are paid for similar purposes but have different names shall be merged and renamed.

“Allowances whose rational for payment is still valid, but whose rates are not commensurate with the intended purpose shall be restructured,” the SRC boss added.

Allowances whose current form remains relevant shall be retained whereas those whose rationale for payment is redundant or overlaps with basic salary will be abolished.

The salaries commission would determine the allowances to be retained, restructured, merged, renamed and abolished.

On pension, the commission would develop a policy guideline to set pensionable pay and employer contribution levels in the public service.

Public servants will also not be paid allowances for purposes that are already compensated for in the relative worth of a job or whose purpose overlaps with basic salary provisions.