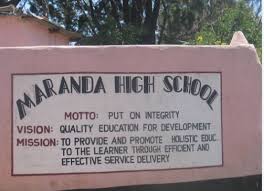 Latest Education News Today; Two schools in Siaya County have been closed indefinitely, and a teacher arrested in Migori County over students unrest.

Get all the Latest Education News HERE

Students of Maranda High School and Rangala High School were sent home on Sunday morning and Taranganya Boys teacher arrested over an arson attack at the institution.

At Rangala, the management sent home 1,000 students to avert the destruction of property after they demanded to be released home for the December holidays.

Abolish boarding schools, they have outlived their usefulness

School Board of Management chairman Stephen Onyango said the students became unruly and insisted they wanted to go home.

According to Onyango, the students said they are not used to being in school in December since it is the month they tour countries like Dubai and South Africa.

“The principal tried to calm them down, but they would hear none of it. We consulted and agreed that the principal releases them to go home before they resort to damaging the school property,” he said.

But according to Onyango, even after the communication, some students still broke windows, some destroyed CCTV cameras and lighting points.

“There was an attempt to access the food store, but this did not succeed… The principal is currently meeting the relevant offices over the matter. We will communicate the way forward once we reach an agreement,” he said.

He said initial intelligence indicated that the students in upper classes influenced those in lower classes to join the fracas.

“The principal already has a few names who were involved. The principal is equally quantifying the damage caused, which shall be passed to all the students on a pro-rata basis. Let us pray for the school and the students,” he said.

By 2.00 pm, hundreds of students could be seen in Bondo town boarding public transport vehicles to their various destinations.

The incident comes barely a week after Form Four students were sent home indefinitely after they allegedly threatened to burn down the institution.

In Migori, a teacher and a student were arrested over an arson attack.

Police believe the two started a fire that razed a dormitory at Taranganya Boys High school in Kuria West sub-County on Saturday night.

Kuria West sub-County Police Commander Cleti Kimaiyo said the teacher, and a student are in their custody.

“We have also recovered two mobile phones and kept them as exhibits for forensic investigation. The two are in custody pending further investigation,” said Kimaiyo.

“The fire started at around 2130 hours when the students were in classes. Unknown suspects allegedly jumped over the fence next to the dormitory,” said Kimaiyo.

The dormitory houses about 200 students.

TSC Opens Mass Recruitment of Teachers Under Permanent And…

TSC:List of Deregistered Teachers in October 2020