Maids are not Doormats, Justice Nderi Reaffirms; Check out the New Conditions for Hiring and Firing Househelps

Maids are not Doormats, Justice Nderi Reaffirms; Check out the New Conditions for Hiring and Firing House helps 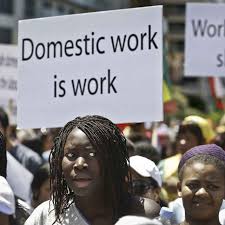 Are you the type who hires and fires house helps based on your mood swings?

Before I proceed, how much do you pay your maid?

If you have a house- help in your home, it is high time you reconsidered your actions and decisions.

For decades now, employers have been underpaying, mistreating, and dismissing house helps without formal notice.

Justice Nderi’s ruling on a case where an employer fired a maid who requested a pay raise might be a game-changer in this circus.

This is after the court ruled in favor of the house help and ordered her employer to give her Kshs 270 000 as compensation for unfair dismissal and meager pay.

According to the complainant, her employer had been paying her Kshs 3000 a month. When she requested to have her wages increased, her boss fired her without notice. That is when she filed a court case to protest against unfair dismissal and low pay.

Maureen Muhani, the house help got hired as a house help in February 2015. After serving for two years, she asked her boss Bhingi to increase her pay.

To her utter disappointment, her boss was greatly angered and fired her the next day.

Secondly, upon dismissal, the employer must issue the house help with a one month notice indicating the termination of the contract.

The boss must also give the house help a certificate of service for the period she has served.

The maid should also be given terminal benefits once the contract is terminated.

“It is illegal to fire an employee, maids included without formal notice, certificate of service, and terminal benefits,” said Justice Nderi in his ruling.

But How Realistic are these conditions?

Although his ruling seems quite reasonable, it is wise to take a moment and reflect upon reality.

When Justice Nderi proposes a monthly pay of not less than Ksh 10000 and other terminal benefits, most Kenyans who seek the services of the house helps barely earn Ksh 20000.

That is why the labor court suggested a monthly pay of Ksh 7000, a negotiable amount pegged upon the employer employee’s agreement.

Secondly, Justice Nderi is proposing terminal benefits that most Kenyans do not have.

Currently, the government is planning to roll out a Public Service Pension Scheme that will see civil servants contribute 7.5% of their salaries towards their retirement plan.

Does this mean that house helps should contribute towards their terminal benefits too?

Lastly, we also have numerous cases of the house- helps deciding to quit jobs without issuing a formal notice to their employers.

In such cases, will the maids be compelled to compensate their bosses for the inconveniences?

SALARIES: BETRAYAL, EMPTY PROMISES AS BOM TEACHERS GET A RAW DEAL FROM SCHOOLS