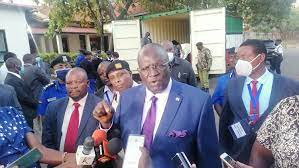 Did you know that the teachers who supervised, Invigilators, managed, and to crown it all, spent sleepless nights marking the recently released KCPE and KCSE national examinations are yet to receive their payment two months down the line?

To add insult to injury, Knec had received money for their pay in time since this money is usually budgeted for long before the commencement of the national examinations.

This week will be a long one for the one and only man in the “house” CS Magoha.

This is after the parliamentary education and research committee summoned him to appear before them within two weeks to answer to queries and other burning issues on Knec contracted Professionals’ pay.

According to Parliament, Knec has taken the joke too far this time around owing to the harsh economic times yet the Council seems to be removed as heaven and indifferent to the plight of poor Kenyan teachers.

This move is most welcome, especially at this time when both Kuppet and Knut, the giant teachers’ unions who are siphoning cash from the teachers have been reduced to toothless dogs whose role is to just bark instead of biting.

We are yet to see unionists like Wilson Sossion who are selfless and willing to give everything up for the welfare of the teachers.

The legislators for once have shown sobriety by noting that the delayed payment is now slowly but surely turning recurring and the government is allowing this issue to occur every single year which means it does not prioritize teachers like other personnel who get their payment on time.

KCPE managers are paid 500 shillings per day for four days, while their KCSE counterparts are paid the same amount for 18 days.

A section of MPs is now demanding an explanation from Education CS Prof. George Magoha as to why those teachers who administered and marked KCPE and KCSE exams have not been paid till now.

The CS will answer the issues in front of the departmental committee on education and research in two weeks.

He is also expected to give specific timelines on when the payments will be released to the teachers.

The legislators claim that the government allowing this issue to occur every single year means it does not prioritize teachers like other personnel who get their payment on time.

Teachers, just like the rest of Kenyans are feeling the heat of the tough economic times. Delaying their payment means subjecting them to further economic turmoil.

Normally, KCPE managers are paid 500 shillings per day for four days, while their KCSE counterparts are paid the same amount for 18 days.

In the 2021/2022 National examinations, the Teachers Service Commission hired a total of 242,406 teachers from across the country.

Administration, drivers, and security officers were also contracted during this period.

These complaints come amidst the ongoing education reforms to close the teacher shortage gap across the country.

TSC will attempt to fill the gap in teacher shortages in the country’s public elementary and secondary schools.

TSC Teachers’ Verification of T-Pay Accounts’ Data; Simplified Procedure and List of Documents Needed for Verification of Data for TSC-Employed Teachers on the Online T-Pay Systemaa

TENSION HIGH IN MACHAKOS AS KNEC OFFICIAL GETS ARRESTED OVER…

Teachers Who Had Paid For TPD Unsure about being Refunded…