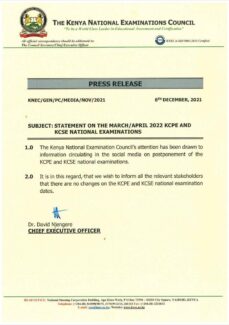 According to an official circular at our disposal,the KCSE and KCPE 2021 examination dates remain the same despite the rising cases of school unrests.

Heads of institutions have proposed postponement of 2021 national examinations for two months as the only way out to curb arson attacks that is currently ravaging schools.

At the same time, they have also proposed early closure of schools to contain the growing indiscipline cases among the learners.

Kenya Secondary School Heads Association (Kessha) chair Kahi Indimuli argued that the present candidates were in Form Three last year, and their stay at home may have affected their readiness for examinations.

“When we brought on board Form Four students last year, these students were left at home for a long time. During the period, they were not properly engaged, and some got into the business while some picked up bad behaviour,” said Indimuli.

Indimuli supported postponing of exams arguing that the school calendar is already late.

“Even if we delay examinations by one of two months, we are already late in the whole school calendar,” said Indimuli.

However, Education Cabinet Secretary George Magoha called for calm and said the examinations already prepared “have a human face.”

He said: “Let our learners maintain calm and be ready to sit examinations because we are going to ensure we have a ‘human face’ in the examinations,”.

Speaking at Egetonto primary school in Kisii county the CS said that exams are ready and there was no need to panic.

“The examinations are ready, and there is no need to panic,” Magoha said at Egentonto Primary School in Kisii.

According to the knec examination timetable, the 2021 Kenya Certificate of Primary Education (KCPE) examinations are to be done between March 7 and 10, next year.

The second term is scheduled to run till December 23.

Under the revised school calendar, third term will start on January 3, 2022, and end on March 4 after nine weeks.

Official TSC lists of shortlisted teachers for promotions in…