The Kenya Certificate of Primary Education KCPE 2021 Results will be released and officially released in April 2021.

New details surrounding the marking and release of the 2021 Kenya Certificate of Primary Education have now emerged.

According to aggrieved education stakeholders, previous KCPE results for candidates from private schools are objective after claims arise that the Kenya National Examinations Council, Knec has been adulterating the results with an aim of giving candidates from public schools who are obviously disadvantaged given the ballooning enrollment rates an edge in the race for Top Schools in the annual online form One Placement.

2021 will be remembered by most of the parents as one of the most expensive years.This has been witnessed since the schools got opened last week.The parents have had to pay dearly for the school requirements such as uniforms and books.Fortunately,the Government had reduced the boarding school fees by 15%.Despite this,the parents are still crying.

The form one admissions have climaxed up the cries of the parents.The parents have been forced to part with huge sums of money for successful admissions.Students who would not raise the required fees have come out and got help from the well wishers.

As the students join form one, their KCPE results have been anchored to Education CS Professor George Magoha ‘s dilemma.

When the exams were done,the ministry of education noted that some teachers had been colluding with some cartels to aid cheating in examinations by some schools.

In 2021, a total of 30 guilty teachers were sacked for the vice. No KCPE candidate had their results cancelled for engaging in exam malpractices.

Now, the Parliamentary Education Committee has launched serious investigations into the allegations about the allegedly doctored 2020 KCPE exams results.

This is after claims of possible manipulation of the Knec results arise despite the seemingly water-tight process of administering and marking the KCPE scripts.

There have been situations where some students deny their results from KNEC.

Some private schools also do claim of being shortchanged.For instance, the last exams saw public schools dominate the private schools. Even as the MPs embark on this contentious investigation, it is believed that clear information will be given after the inquiry. 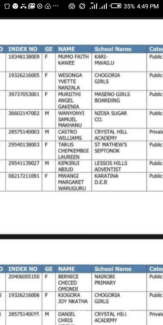 KCPE Results 2020; List of Schools that Produced  Top Scorers with 400 marks and above per County and region in 2021

Despite being ridden by the the ongoing pandemic, KCPE 2020-2021 candidates defied all odds to post impressive results during national exams this year.

This category of learners will be joining national schools come July to continue pursuing their dreams under the 100 percent government sponsorship.

In this write-up, we provide a full list of KCPE 2020-2021 best performing and top ranking primary schools nationally that produced 2020 KCPE candidates who scored at least 400 marks nationally. See the table below

KCPE 2021-2022 Results; List of Schools that Produce KCPE Top Candidates with 400 marks and above per County and region

Registration of KCSE and KCPE Candidates by Knec in…

Knec Registration Guidelines and Circular for 2023…