This article provides photos of the top 10 craziest celebrity lookalikes which may make you wonder whether there is a secret celebrity cloning facility out there.

Born on September 13, 1996, the American actress Lili Reinhart is a typical identical sister of Sarah Gadon.

Lili is popular for her role Betty Cooper in Riverdale and Game of Thrones.

Her lookalike  Naya Rivera on the other hand is an American actress, model, and musician. She began her career early as a child actress appearing in national television commercials. She made a major appearance at a tender age of four in CBS sitcom The Royal Family (1991-1992).

With a net worth of over $40 million, Khloe Alexandra Kardashian is a semblance of Ashley Graham.

With these similar looks, Ashley could be the sixth Kardashian Sister!

Khloe Kardashian is an American media personality, socialite, and model who together with her family has starred in reality television series “Keeping up with the Kardashians.”

Her lookalike Ashley Graham on the other hand is an American plus-size model and TV presenter.

Apart from Khloe Kardashian, Ashley Graham seems to be having yet another twin sister-Eva Mendes whose bone structure and gorgeous brown curls resemble.

Although she died at a tender age of 32 after contracting acute pneumonia, Brittany Murphy’s memory still lives on for she looks like Lili Reinhart. 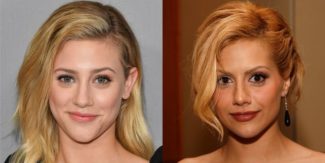 Check out their photos below

LOOMING TEACHER CRISIS EVEN AS THE MINISTRY OF EDUCATION…