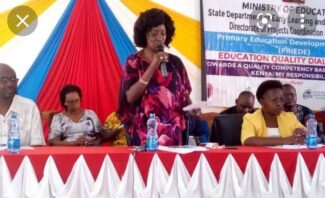 TSC News Today: The Teachers’ Service Commission (TSC) is a constitutionally mandated body in Kenya that deals with matters teachers’ recruitment, promotions and salaries. Unfortunately, the TSC Tpay online system is not watertight for details have now emerged indicating that the system might have been compromised and infiltrated by fraudsters resulting in the overpayment of Sh385 million in salaries.

This has raised concerns from various stakeholders who are now raising eyebrows on the integrity of the Teachers Service Commission’s multibillion-shilling payroll.

An audit of the payroll revealed that the Teachers Service Commission overpaid 32 teachers by Sh33 million.

This was in addition to the Sh352,853,152 in excess payouts discovered during a review of the commission’s books of accounts.

The overpayment to teachers and staff was raised after the commission failed to explain the source of the payments and how they accumulated to hundreds of millions of dollars.

“The origin and the build-up of the salary overpayments have not been explained,” Auditor General Nancy Gathungu said in a report on the TSC’s books of accounts.

Gathungu stated in the review for the fiscal year ending June 2021 that it was uncertain whether the Nancy Macharia-led institution would recover the funds.

“The repayment period for the recovery of the outstanding amounts is beyond the retirement age of the respective teachers,” the auditor said in respect of the 32 teachers.

Gathungu went on to say that in the aftermath, “the recoverability of the salary overpayment’ balance is therefore doubtful.”

The auditor cited a case in which the commission had not received payment for over two years, “casting doubts on the recovery of the [entire] amount,” which is part of the Sh352 million.

According to the auditor, the review also revealed that the commission lacks proper internal controls to prevent losses from such payments.

“The existence of an effective internal control to safeguard loss of public resources could be confirmed,” she explained.

Concerns have been raised about the porousness of payrolls and lists for entities whose interventions involve the disbursement of cash.

TSC is one of the state agencies with large budgets. It has been allocated Sh296 billion for the current fiscal year.

Several audits have identified irregularities in the disbursement of cash in the education sector, ranging from school fee subsidies to capitation fees for technical colleges.

The Education ministry’s Vocational and Technical Training department may have lost more than Sh6.2 billion in the previous fiscal year due to inflated student numbers and unsupported college disbursements.

The audit revealed that Sh2.5 billion was disbursed during the Covid-19 lockdown when students were not in class.

Furthermore, Sh4,264,665 in respect of 145 staff had no movement over the last 12 months. Management provided no explanation for the non-recovery of salary advances.

TSC has also been questioned about cash disbursements to counties after failing to provide a breakdown of the amounts owed by each county for audit review.

Gathungu has also raised concerns about the non-remittance of over Sh2.2 billion in Pay as You Earn tax from 5,412 commission staff and 25 secretariat staff.

The audit revealed that the deductions were not made on the basis that the employees were disabled.

Gathungu, on the other hand, claimed that a review of the payroll revealed that employees with special needs had special codes 2-9, while those paid had code 0.

The auditor stated that this indicated that they were not people with special needs and that the Kenya Revenue Authority had not exempted them from paying income tax.

It is a violation of the Income Tax Act, CAP 470, to fail to deduct and remit Pay As You Earn (PAYE) tax.

How To Use Zeraki Learning App For Holiday Teaching, Assignment

TSC Profile Updating Process and Deadline for Teachers, a…